The novelty of a traveling art exhibition in 1903 is matched by the surprising reason it occurred: a furniture maker’s business deal with an educational institution.

A new book from RIT Press, A Symbiotic Partnership: Marrying Commerce to Education at Gustav Stickley’s 1903 Arts & Crafts Exhibitions reveals the driver of the courtship leading to an unusual marriage between a commercial manufacturer and a not-for-profit educational institution: a corner cupboard. 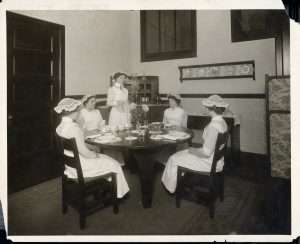 Purchased by Mechanics Institute (MI) from Gustav Stickley’s United Crafts in 1901 or 1902, the unique, bench-made cupboard was either custom-designed to meet Mechanics Institute’s pedagogical requirements or a factory prototype. In other words, it was no off-the-rack selection.

The cupboard’s acquisition spurred the partnership between commercial and noncommercial worlds for a cosponsored, traveling exhibition pivotal in the Arts and Crafts Movement’s growth — one transforming decorative arts and art education.

Art exhibitions were no novelty at the turn of the 20th century. And the very first Arts and Crafts exhibition took place in 1888 in London.

But turn-of-the-century exhibitions were place-anchored, one-and-done events. They happened in Boston or Chicago, and never Boston and Chicago.

Initially envisioned as a Syracuse-only event, were it not for what else happened, the 1903 exhibition could be dismissed for what it was: self-serving, shameless shilling for Stickley’s hometown United Crafts furniture enterprise. Following a twelve-day run in his salesrooms, the exhibit immediately moved ninety miles west to Mechanics Institute in Rochester.

Though some historians mention the exhibit’s travel from Syracuse to Rochester, none explore its novelty. Why did the exhibition travel to Rochester? What and who motivated the move from the first venue to the second? Whose interests were served?

Groundwork for the unusual relationship began when Mechanics Institute bought a Stickley dining set, including the corner cupboard, for its new (George) Eastman Building in 1901. The Institute’s fast-growing Domestic Science program required realistic practice space and objects for its students.

Rochester was a receptive, favorably predisposed “target” for the exhibition. Its Arts and Crafts Society was the nation’s first such community organization. A cohesive group of Rochester Arts and Crafts enthusiasts mixed professionally and socially with both Mechanics Institute and Stickley’s United Crafts. Among them: Harvey Ellis, who went to work for Stickley as a designer after the exhibit closed; architect Claude Bragdon; and painter M. Louise Stowell.

Connecting the Stickley enterprise to Mechanics Institute was Theodore Hanford Pond. Previously director of design and applied art at RISD, Pond was hired by MI for its Department of Applied and Fine Arts in 1902.

Pond’s arrival at Mechanics Institute both afforded the administrative “muscle” and signaled the curricular affinity to Stickley’s enterprise needed to make possible the exhibition’s second venue.

Adding the noncommercial Mechanics Institute venue raised the Stickley firm’s profile, simultaneously conferring credibility and expanding legitimation as much for his products as the Movement’s ethos. By hosting the exhibit, MI stood to benefit from growing enrollments, enhanced prestige (and financial endowments) for its Applied and Fine Arts department, and strengthening its alliance with industry and its graduates’ employment opportunities. 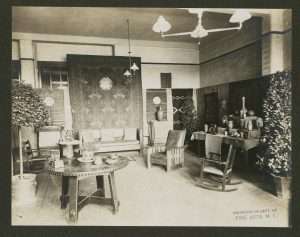 By enlisting a noncommercial partner, the exhibition gained a benefit beyond the grasp of any for-profit manufacturer: goodwill. The Rochester venue tied the exhibit to an institution free from Stickley’s profit motive, one imbued with the altruism associated with education, and placed the exhibit at a school whose mission and curriculum were sympathetic to the Movement’s interests.

Stickley envisioned the exhibition as one tactical prong in his firm’s marketing strategy: price tags were prominent on exhibition objects and, for the forgetful (or overwhelmed), memorialized in a printed program, forming what some might call a “shopping list.”

Some 4,500 people viewed the Syracuse presentation, and attendance at the Rochester venue “exceeded the most optimistic estimates,” despite inclement, 40-degree weather. The Syracuse Post-Standard enthusiastically described the exhibit as “kaleidoscopic . . . attractive to the eye and artistic in workmanship.” The Syracuse Evening Telegram reported visitors “feel an immediate sense of rest and ease.”

One news story reported experts who said “nothing like it has ever been shown in the United States.” Likewise, a lengthy article in the Rochester Democrat and Chronicle breathlessly claimed the exhibit eclipsed “anything of the kind ever held in this country” and “cannot fail to have considerable effect in cultivating the artistic tastes of the public.”

The book’s archival images track the peripatetic corner cupboard’s 40-year “life” at Mechanics Institute to mid-century, when it disappears. Perhaps sold as surplus or given away, the author tracked the cupboard to its present location: the home of an RIT employee, not a dozen miles from its original installation.