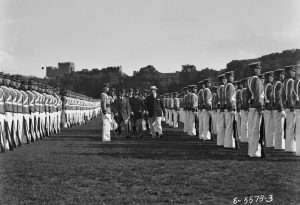 More than 2,500 photographs taken at the West Point Military Academy in the early 20th century are now available in the National Archives Catalog.

Many of these photographs are uncaptioned or contain unknown subjects. The National Archives Catalog is looking for Citizen Archivists to add keyword tags to photographs in this series. The public can add tags to help identify people, topics, or subjects, making them more searchable and discoverable in the Catalog.

This series consists of images created by White Studio of New York City between approximately 1912 and 1934.

In 2017, the photographic negatives were transferred from West Point to the National Archives in College Park for storage, conservation treatment, and digitization of film found to be nitrate. The scans currently available in the Catalog are from some of the earliest film negatives in the collection. 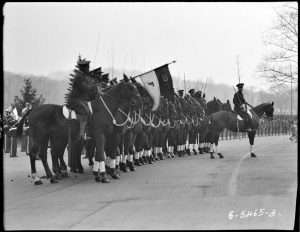 The collection features a variety of events and activities related to the West Point, including arrival at dormitories, parades and drills, marksmanship and firearms training, field training, infantry squad tactics and Air Service training.

Photographs include individuals as well as groups and locations. Many of the photographs are of cadets in training, however, there are also portraits of individual cadets and family members as well as photographs of instructors, visiting foreign dignitaries and sporting events.

Included within this series are photographs of African American Buffalo Soldiers serving at West Point, decades before the military was officially integrated.

The images were identified by a preservationist who was digitizing thousands of nitrate negatives transferred from the Academy to the Still Picture Branch of the National Archives. Recognized for their expertise in riding, African American cavalry noncommissioned officers of the 9th and 10th Cavalry Regiments were stationed at West Point to serve in the Academy’s Detachment of Cavalry and teach Academy cadets military horsemanship.

Starting in 1907, the detachment became a “colored unit” composed of African American soldiers during a time when the military was still racially segregated. The Buffalo Soldiers instructed cadets until 1947.

More information about these records can be found here.