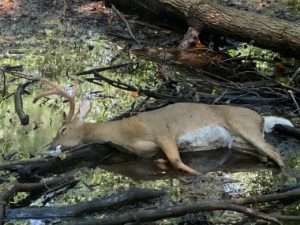 The New York State Department of Environmental Conservation (DEC) have confirmed that a white-tailed deer in the town of Dover Plains, Dutchess County, died recently after contracting Epizootic Hemorrhagic Disease (EHD). This detection marks the first EHD confirmation in New York for 2022. DEC is currently investigating reports of several other dead deer from Dutchess County.

EHD virus is an often-fatal disease of deer that is transmitted by biting midges – small bugs often called no-see-ums or “punkies.” The disease is not spread directly from deer to deer and humans cannot be infected by deer or bites from midges.

The EHD virus was first confirmed in New York in 2007 with relatively small outbreaks in Albany, Rensselaer, and Niagara counties, and in Rockland County in 2011. In 2020, a large EHD outbreak occurred in the lower Hudson Valley, centered in Putnam and Orange counties, with reports from the public of approximately 1,500 dead deer. In 2021 the outbreak shifted and DEC received more than 2,000 reports of dead deer primarily in Ulster, Dutchess, Columbia, Oswego, and Jefferson counties.

Once infected with EHD, deer usually die within 36 hours. EHD outbreaks are most common in the late summer and early fall when midges are abundant. Symptoms include fever, hemorrhage in muscle or organs, and swelling of the head, neck, tongue, and lips. A deer infected with EHD may appear lame or dehydrated. Frequently, infected deer will seek out water sources and many succumb near a water source. There is no treatment or means to prevent EHD. The dead deer do not serve as a source of infection for other animals.

EHD outbreaks do not have a significant long-term impact on deer populations, but deer mortality can be intense in small geographic areas. EHD is endemic in the southern states where there are annual outbreaks, so some southern deer have developed immunity. In the northeast, EHD outbreaks occur sporadically and deer in New York have no immunity to this virus. Consequently, most EHD-infected deer in New York are expected to die. In the north, the first hard frost kills the midges that transmit the disease, ending the EHD outbreak.

Sightings of sick or dying deer should be reported online or to the nearest DEC Regional Office or Environmental Conservation Police Officer. More information about EHD and a link for public reporting of deer with EHD symptoms is at DEC’s website. DEC may collect samples from deer and analyze data from deer reports to determine the extent of the outbreak.