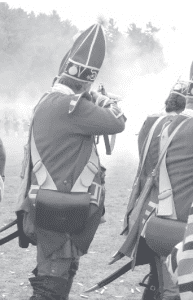 New York’s new gun law, which bans weapons from “sensitive locations” such as parks and museums, will have no effect on musket demonstrations, including at Fort William Henry or re-enactments in Lake George Battlefield Park, according to Warren County Sheriff James La Farr.

“It is not within the spirit of the law to prohibit those activities,” LaFarr said.  The re-enactors’ muskets and cannon fire only blanks.

Fort Ticonderoga, which is located in Essex County, is also unaffected by the new law, says its president and CEO, Beth Hill. “We do not plan to change our operations or special events,” she said.

“Under Hochul’s unconstitutional gun ban, re-enactors across Upstate New York who are celebrating America, are felons. Far Left Democrats in Albany are so woefully out-of-touch that obsolete historical replica guns are too ‘offensive’ for them to see the sight of,” said Stefanik.

In response to the claims of Stefanik and local legislators that the new law prohibits the use of even replica or performative weapons, Governor Hochul’s office released the following statement to media: “Governor Hochul passed new public safety laws to protect New Yorkers and keep them safe from gun violence. These laws allow historical re-enactments to occur, and we will work with legislators and local law enforcement to ensure these events can legally and safely proceed.”

Opponents of the new law have also claimed that it will prohibit hunting in the Adirondack Forest Preserve.

A spokeswoman for the Department of Environmental Conservation, however, said hunting is still permitted within the Wilderness and Wild Forest areas of the Adirondack Forest Preserve.

“Many areas of the Forest Preserve, including Wilderness and Wild Forest areas, remain open to hunting,” said the DEC’s Lori Severino.

“Hunting is still allowed on DEC lands where previously permitted, such as DEC Wildlife Management Areas.”

Severino said the Department of Environmental Conservation would have no comment on the Adirondack legislators’ bill.

“The DEC does not comment on pending legislation,” said Severino.

According to State Senator Dan Stec, the new law places “approximately 130,000 people living on Adirondack Park lands at risk for felony charges for merely owning a shotgun or rifle.”

Stec claimed that under the terms of the new law, the Adirondack Park, a six million acre mix of public and private lands, is a park and therefore “a sensitive location” from which weapons are banned.

A spokesman for Governor Hochul, Jim Urso, denied that the Adirondack Park was considered “a sensitive location,” noting that “the Adirondack Park… is distinguished both in statute and in the state constitution from all other public parks in New York State.”

Sheriff LaFarr said no Adirondack Park resident living in Warren County who is authorized to own a gun and is abiding by all laws related to its use or storage need fear arrest.