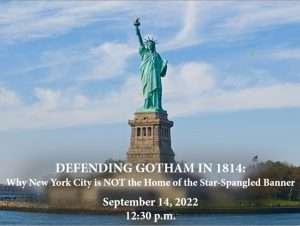 The New York State Archives will host “Defending Gotham in 1814: Why New York City is not the Home of the Star-Spangled Banner,” a program set for Wednesday, September 14th.

In this program, guest host Richard Comstock and author Richard V. Barbuto will discuss the defense of the city of New York during the War of 1812. Comstock and Barbuto will look at how New Yorkers prevented a British invasion and how their work left a permanent mark on New York City.

Richard V. Barbuto is Professor Emeritus of Military History at the U.S. Army Command and General Staff College at Fort Leavenworth, Kansas. Richard is a graduate of West Point and served for twenty-three years on active duty as an armor officer. He is a two-time Larry J. Hackman Research Residency Award Recipient (2006, 2009) and author of New York’s War of 1812: Politics, Society, and Combat, Niagara 1814: America Invades Canada and Long Range Guns, Close Quarter Combat: The Third United States Artillery Regiment in the War of 1812.

Richard Comstock, LTC, Retired, is a Steward of the Archives Partnership Trust. He spent four years on active duty with the US Army, which included tours of duty in Vietnam and Korea. Richard was also a member of the New York Army National Guard and retired in 1990 after having spent the last four years commanding the 1st Battalion, 258th Field Artillery. Richard was also a tax partner with Arthur Andersen, subsequently a partner at Deloitte, and finally was Managing Director, Tax at MBIA where he retired in 2017. He currently consults on tax matters and is on the board of various not-for-profit organizations.

This program will begin at 12:30 pm, and will be held virtually. Registration is required. For more information or to register, click here.