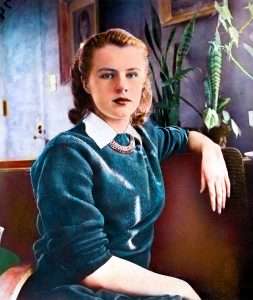 In December 1946, 18-year-old Bennington College sophomore Paula Jean Welden disappeared while walking alone on Vermont‘s Long Trail, which passes a few miles from the college. Local sheriffs were criticized for errors made in the investigation, which led to the creation of the Vermont State Police.

The Welden case, which inspired Shirley Jackson’s second novel Hangsaman, was one of several unexplained disappearances in the same area at the time. Her college dormitory, Dewey House, remains standing on campus.

The clothing she wore was not adequate for the weather forecast that night; there was no indication that she expected to be out for more than a few hours. Welden hitchhiked to the trailhead in Woodford. She spoke to a group of hikers and she was spotted on what is now known as Harbour Road. From there the forests began to thicken.

Local police investigators learned that Fred Gadette, a lumberjack lived on Harbour Road had seen Welden walk by while arguing with his girlfriend. Gadette shortly thereafter stormed off in a rage either to a nearby shack or drove up the road in the direction of Welden.

His stories differed and he is believed to have lied to police several times and so was considered a person of interest at the time, and when the case was reopened in 1952.  Gadette is alleged to have told two people that he knew where Welden was buried, but later claimed to have lied.

No evidence was ever found of a crime and although the case remains unsolved, local and national interest continues. Paula Welden’s disappearance is a regular query at the Bennington Free Library and at the Bennington Museum Regional History Room, and in 2021 it was included in Parade‘s “50 Strangest Unsolved Mysteries of All Time.”

The Vermont Historical Society will host “The Enduring Mystery of the Paula Welden Case,” on Sunday, September 18th at the Bennington Museum.

This program will take place from 2 to 3 pm. For more information visit the Bennington Free Library website, call (802) 442-9051 or email reference@bfli.org.