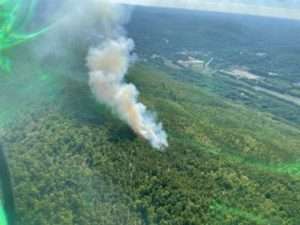 The 22,275-acre Minnewaska State Park features scenic overlooks of the Catskills and four high elevation lakes. Mohonk Lake, home of the historic Monhonk Mountain House, lies just to the north on private property. The park is managed by OPRHP and the Palisades Interstate Park Commission. The Mohonk House is located some 15 to 20 miles from the closest fire. 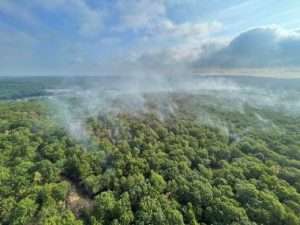 Due to the remote and rugged terrain, NY State Police Aviation was called in to help with bucket drops at both fires.

By 10 am Sunday, dozens of local firefighters had joined eight Rangers, including DEC volunteer firefighters, two State Police helicopters, and OPRHP staff in fighting the fires.

On Tuesday the Napanoch fire was estimated at approximately 130 to 150 acres and Governor Kathy Hochul today announced the deployment of the New York Army and Air National Guards, along with a number of other resources.

Two Army National Guard UH-60 Black Hawk helicopters with three-person crews, capable of dropping 600 gallons of water at a time, have begun aerial operations, while a contingent of five firefighters from the Air National Guard have been deployed.

State Department of Environmental Conservation Forest Rangers, in cooperation with Ulster County, are serving as Incident Commanders. Hochul also said that more than 200 wildland firefighters and volunteers were now fighting the fire.

Additionally, 20 Canadian firefighters from Quebec, secured through the Northeastern Forest Fire Protection Compact, are set to arrive on Thursday. The Compact, established in the 1940s, provides the means for its member states and provinces to cope with fires that might be beyond the capabilities of a single member through information, technology and resource sharing (mutual aid) activities. 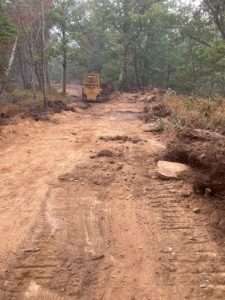 Minnewaska remains closed until further notice. No residences are impacted at this time. Out of an abundance of caution to protect residences close to the Napanoch Point fire, DEC Forest Rangers and staff volunteers have been working with a bulldozer in the town of Warwarsing near Berme Road to put a contingency fire line in place.

A community meeting will be held at the Ellenville Junior/Senior High School Auditorium at 28 Maple Avenue in Ellenville today, Aug. 30, at 7 p.m. This will be an opportunity for residents and others in the impacted area to ask questions about the coordinated fire response.

On Friday, NYS Forest Rangers responded to a fire in the area of Lonesome Bay on Lower Saranac Lake. Caused by a lightning strike, the fire was considered a single-tree torch that burned 10 feet of ground around the tree. Rangers declared the fire out at 2:30 p.m. the following day.

New York State is closely monitoring the weather conditions as a front moves into the State from the west. While some rain may be expected, the amount of rain is not anticipated to have a significant impact and could lead to unfavorable conditions including high winds and lightning strikes.

The New York State Department of Environment Conservation (DEC) is encouraging New Yorkers and visitors to follow the recommendations below to reduce the risk of wildfires.

While camping in the backcountry, New Yorkers are advised to:

For information on open burning and campfire safety in New York, go to DEC’s Open Burning in New York and Fire Safety When Camping webpages. For further questions about wildfires, call 1-833-NYS-RANGERS and call 911 to report a wildfire.

This story was updated at 3:40 pm, Wednesday.