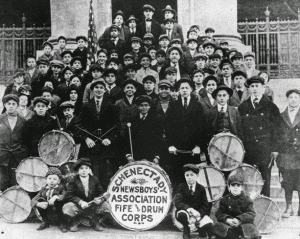 Around the turn of the twentieth century, many boys sold newspapers on city streets. In Schenectady, as in cities around the country, these boys and young men, known as “newsboys” or “newsies,” were among the main distributors of newspapers to the public.

Newsboys did not work for one particular newspaper; they were independent agents who purchased newspapers from the publishers and sold them around the city. Since they were not allowed to return unsold papers, newsboys worked hard to sell all of their newspapers in order to make a profit. In Schenectady newsies protected their territories and competed vigorously, especially for the potential customers who headed to work at General Electric and the American Locomotive Company each day. 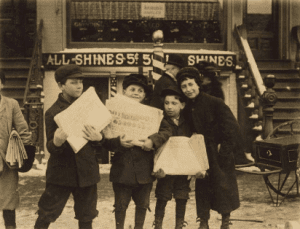 Maria Giacchini, whose father was a newsboy in Schenectady, shared her recollections of her father’s stories of his newsboy days: “I recall his telling of early morning routine, rising at 4 am trying not to disturb the rest of the family while getting ready to leave the house to sell papers in the streets. When he sold all his papers, the highlight of the morning was to use some of the profit he had earned from the half-cent per paper return and stop at the baker shop for a piece of pie or a doughnut … He gave the rest of his earnings to his mother, but she would always check his pockets to be sure he didn’t forget to give it all to her.”

In 1910, in the city of Schenectady, boys as young as 10 years of age were permitted to sell papers during the day. Teenage boys age 14 and older were allowed to sell newspapers at night. Girls under the age of 16 were barred from selling newspapers altogether. Each newsboy under the age of 14 was required to register with the Schenectady Superintendent of Schools and wear a badge proving he was registered. The law changed in January 1914, raising the minimum age for newsboys to 12 and permitting only boys age 14 and older to sell papers before 6:00 a.m. or after 8 pm.

Regardless of the law, some local boys were as young as 8 when they began to sell newspapers on the streets. In 1914, the Secretary of the Schenectady’s Board of Education reported that there were nearly 1,000 registered newsboys in the city.

The loud calls of the newsies advertising papers for sale could be heard throughout Schenectady at all hours. It was a feature of city life that often prompted complaints. An article dated December 14, 1911 in the Schenectady Gazette reported, “a number of complaints have been received of the many boys who [at late hours] are on the streets at night selling newspapers. They gather about the waiting room [of the downtown trolley station] and other public places and cause considerable annoyance to pedestrians and persons waiting for cars.”

Other articles in local newspapers noted the complaints of Schenectadians about the newsboys’ shouts on Sunday mornings in particular.

Although on the whole newsboys were simply hard-working young people trying to help their families survive, they were characterized nationwide in the public mind as loud, ill-behaved, unruly boys who caused trouble, fought, and stole. Max Hutten, who at age 95 recalled his days as a turn-of-the-century newsboy, allowed that this characterization was not entirely off-base. “In those days, the newsboys were pretty rough,” Hutten told Daily Gazette reporter Patrick Kurp in 1996. “We were kind of a gang, but we just fought with our fists. We didn’t fight with guns like they do today.” 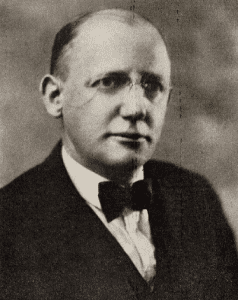 In July 1915, Police Justice John J. McMullen founded the Schenectady Newsboys’ Association to curb the city’s youth street gangs. The police and city officials hoped to redirect these young men and give them more positive outlets for their energy.

A July 19, 1915 editorial in the Schenectady Gazette posited that the organization was an excellent idea: “It should at the very least have a strong influence toward preventing various petty misdemeanors among the boys. As a means of keeping the members out of trouble it is by no means as unimportant as it may seem at first thought.” The writer of the editorial further asserted that in running the organization themselves, the boys would also learn “citizenship on a small scale.”

The Schenectady Newsboys’ Association began formally on July 23, 1915, with 28 boys. The 15-year-old President of the organization, Joseph Guarnier, remarked upon the creation of the group, “We will try to show that boys can rule themselves as well as grown people, and perhaps better … We are going to cut out all gambling, swearing, cheating, and slang, and show the grown-ups how to act.” 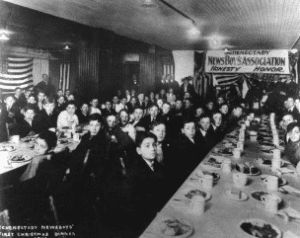 The initial slogan of the organization was reported as being “No Roughnecks Allowed;” it would soon change to “Honesty – Honor.” Within one week after the Association was formed, its membership had swelled to 91, and would rise to 125 by mid-September. At its peak in 1917, the organization had 225 members.

In its earliest months, the organization met in the State Street clubrooms of the Women’s Political Union, a local women’s suffrage group, who also sponsored parties and entertainment for the boys. In September 1915, members of the local Carpenters’ Union stepped in to create space for the boys in the basement of the YMCA building, which was then at the corner of State and Ferry Streets.

In the weeks following the establishment of the Newsboys’ Association in 1915, articles began to appear in local newspapers citing the integrity of the newsboys in returning lost items to their owners and in breaking up fights. Newsboys were also reported as standing up for their rights. When a customer rudely snatched a paper from a newsboy and tossed a penny to the ground for payment, a fellow newsboy stood in the path of the customer, looked him in the eye, and said, “I beg your pardon.” The customer picked up the penny, handed it to the newsboy he had treated poorly, and apologized to him.

In another case, members of the Schenectady Newsboys’ Association chased down a newsboy who had stolen a customer’s change and forced him to return it. “We won’t stand for any crooks among the newsboys of this city,” said the organization’s Vice-President, Julius Goldstein, to a Gazette reporter following the incident. “Almost all the boys are honest, but any of them who tries any underhanded work is going to be punished. Every newsboy in the city has got to give the people a square deal or there will be trouble.”

The organization also established a peer court to address mischief and petty crimes among the newsboy ranks. One year after the formation of the group, an article in the Schenectady Gazette reflected on the first year of the existence of the Newsboys’ Association: “through help given by the members of the association, Police Judge McMullen has been enabled to break up several gangs of unruly boys, who had in the past consistently committed various acts of vandalism, and now the city can boast of having one of the finest lot of newsboys of any city in the state.”

In addition to regulating the behavior of the newsboys, the Schenectady Newsboys’ Association also provided a means for fun and recreation. The Newsboys’ Association held numerous sports events, picnics, dinners, and camping trips, and visited local amusement parks. They participated in local parades and celebrations. The organization also created its own Fife and Drum Corps.

The newspaper went on to say that the newsboys “of the original club,” who had since grown into men, “now hold important positions in the professions and in business and industry.” All of the pallbearers chosen to carry the casket during McMullen’s funeral were former members of the Newsboys’ Association. Although the organization lasted less than ten years, it shaped the lives of hundreds of Schenectady’s boys as they grew into adulthood.

Melissa Tacke wrote this essay for the Schenectady County Historical Society Newsletter, Volume 58. Become a member of the Society online at schenectadyhistorical.org.