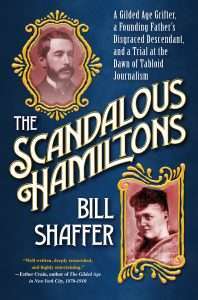 The new book The Scandalous Hamiltons: A Gilded Age Grifter, a Founding Fathers Disgraced Descendant, and a Trial at the Dawn of Tabloid Journalism (Citadel Press, 2022) by Bill Shaffer takes a look one of the greatest scandals of the Gilded Age, and the story that helped give rise to the sensational tabloid journalism still driving so much of the news cycle in the 21st century.

The Scandalous Hamiltons looks back at a con-woman prostitute who met the descendant of Alexander Hamilton in a brothel, duped him into marriage using an infant purchased from a baby farm, then went to prison for stabbing the couple’s baby nurse — all while in a common-law marriage with another man.

The scandal surrounding Evangeline and Robert Ray Hamilton, though little known today, was one of the sensations of the Gilded Age, a sordid tale involving bigamy, bribery, sex, and violence.

When the salacious Hamilton story emerged in during Eva’s trial for the August 1889 stabbing, it commanded national and international newspaper coverage, in part thanks to the Atlantic telegraph cable and the recently founded Associated Press.

As lurid details emerged, the public’s fascination grew — how did a man of Hamilton’s stature become entangled with such an adventuress? Nellie Bly, the world-famous investigative reporter, finagled an exclusive interview with Eva after her conviction. Hamilton’s death under mysterious circumstances, a year after the stabbing, added to the intrigue.

Through personal correspondence, court records, and newspaper accounts, The Scandalous Hamiltons explores the saga and the role of tabloid journalism and celebrity.

Bill Shaffer holds an M.A., History of Design andCuratorial Studies from Parsons, The New School, New York. He is the author of Emotion in Motion: 55 Baranger Displays. Shaffer has been published on designobserver.com and the online site of Cooper Hewitt National Design Museum, where he was a Smithsonian Fellow. Shaffer has worked as a Research Assistant for Paul Goldberger on his book, Ballpark: Baseball in The American City (Knopf, 2019) and for Laura Auricchio’s contribution to A True Friend of The Cause: Lafayette and the Antislavery Movement (Grolier Club, 2016).