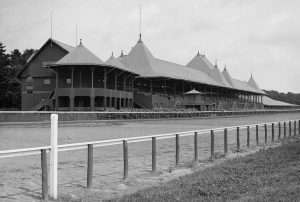 The Saratoga Race Course is instantly recognizable by its iconic roofline and unique treatment. The Gilded Age survives to our time through the turret-spiked, finial capped, slate roof of the grandstand.

The very distinguishable noble crown of racing’s dowager queen places one instantly at the Spa in the foothills of the Adirondack Mountains, and announces “Saratoga Springs.” 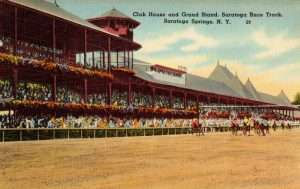 The summer resort, made popular by healing mineral waters that are part of indigenous history, saw thoroughbred horse racing introduced in 1863 on a track across Union Avenue, presently part of Horse Haven. The inaugural race meet was so successful that the following summer the track was relocated to its present site, with its larger grounds.

The group of pioneering sportsmen behind the effort, who were also successful in business, recognized the opportunity and potential at the track as a good gamble, and incorporated in 1865. As racing spurred breeding, the placing of wagers was tolerated, and the group named their new corporation “The Saratoga Association for the Improvement of the Breed of Horses.” The group furthered betting interests with the operation of a clubhouse that functioned as a casino, which operated behind a veneer of respectability for those “in the know.”

The shareholders of the track continually poured their revenues into the facility, and the racing contributed toward the then village’s economy, and was supported in turn by the established resort infrastructure. Spectators were accommodated at the track in a modest wood structure similar to those at many county fairgrounds. A grandstand with incremental stepped seating levels and a simple gable roof provided better race viewing, and cover from sun and shower. This building was constructed by local craftsmen, and it was repeatedly improved and augmented, as the reputation for great racing increased the popularity of the meet over a span of nearly three succeeding decades.

By that time many of the original incorporating shareholders of the Saratoga Association had passed away, and the casino had come under increased scrutiny for its principal shareholder, Albert Spencer. With a single controlling interest, several scribes were quick to point out that the “Saratoga Association, was an association in name only.” Rumors, which seem to especially permeate race tracks where the patrons are always seeking an edge, abounded in discussion about a change in ownership.

Tales of this sort were a common conjecture in polite conversation, as everyone who visited had an interest. This prospective sale discussion bore more credence than in the past, as Mr. Spencer, the majority stockholder, had earlier sold his very profitable clubhouse/casino enterprise to Richard Canfield. Also, the prospective principals in the projected deal were noted racing men of unlimited capital: Pierre Lorillard, August Belmont, Senator George Hearst, D.D. Withers, John A. Morris, A.J. Cassatt and W.L. Scott, with the syndicate headed by publisher William J. Arkell.

Arkell, whose own fortune was made in publishing a host of daily newspapers and the very popular Judge Magazine, along with Frank Leslie’s Illustrated Newspaper, had very strong ties to Saratoga County. He also operated the Hotel Balmoral there, at the same Mount McGregor location where the Drexel Family and Arkell provided the cottage used by former President U.S. Grant to compose his memoirs shortly before his demise.

It may have been as difficult to pull off a multi-partner high-profile deal in 1890, as it is today, and considering Arkell’s irritated comments on the matter, some things may not have changed. In response to a question from a Saratogian reporter on the track sale, Arkell, walking along Broadway, was quoted as responding:

“I have sold my interest in Judge to my partner, Russell Harrison, and have bought the Chicago stock-yards with a portion of the proceeds. I intend, of course, to invest three or four millions of dollars in Saratoga and then will buy up Canada and present it to the United States. Just at present I am negotiating for the purchase of the British Navy.”

With so many of his own reporters in the field, it is surprising Arkell allowed himself to answer a question that way. Comically the scrivener felt it necessary to explain, “It was evident from the sarcasm used Mr. Arkell is non-committal on the subject.”

The 1890 track season ended in Saratoga, and when the leaves were down as autumn transitioned to the frigid season, it was announced that all the officers and trustees of the Saratoga Association had been replaced by members of the Arkell syndicate, indicating an orderly property transition. As so often occurs in the thoroughbred racing world, the expected failed to materialize, mostly due to the unforeseen deaths of August Belmont and Senator Hearst.

Many daily publications during the winter of 1891 lamented the collapse of the transfer of the Saratoga Racing Association to the Arkell group, but indicated that the important changes and improvements projected would all be carried out as planned. It’s conjectured that the soon-to-be new owners moved beyond planning, with several modifications to the racing facility before the deal was closed. Indeed, several contracts let by the Arkell syndicate, such as the construction of a new betting ring by Saratoga’s master builder Andrew Robertson, were honored by Albert Spencer. Turnberry Consulting associates Paul Roberts and Isabelle Taylor in 2011 published in The Spa-Saratoga’s Legendary Race Course that perhaps the parameters for the classic grandstand, with its iconic slate roof and unique turrets with copper apex, were established by the Arkell group.

With the Arkell syndicate deal lost, Albert Spencer accepted another offer, and a paradigm shift occurred when the notorious Gottfried Gottlieb Walbaum purchased the Saratoga Race Course in August of 1891. This deal was brokered by Paul Grening, the proprietor of the Kensington Hotel on Union Avenue at Regent Street, with him becoming an officer of the transferred Saratoga Association.

Not all welcomed Walbaum in Saratoga, as his operations at the Guttenberg Race Track near Weehawken, New Jersey were more than suspect. The Brooklyn Eagle did not mince words, “The knell of doom has sounded for high class racing at Saratoga. Guttenberg has laid grimy hands upon it. Not satisfied with their illicit gains from winter racing the Guttenberg guerrillas propose to raid upon a New York track for thirty days of summer racing… The plagues of Egypt would be easier to bear.”

In late November of 1891 the Saratoga Association contingent, headed by G.G. Walbaum, met for a site review with H. Langford Warren, and discussed a contract for construction for a new clubhouse and grandstand complex. Given the limitations of 1890s design work, it would stand to reason that architect Warren “caught a flyer out of the gate” on his proposal, perhaps having been contacted originally by the Arkell group.

This same timeline neatly fits with author Maureen Meister’s conjecture in her book Architecture and the Arts and Crafts Movement in Boston- Harvard’s H. Langford Warren, which compares Warren’s Saratoga clubhouse/grandstand design elements to the South End Grounds baseball pavilion in Boston, opened in the spring of 1888. This ballpark, which housed Boston’s National League Club, had a very short existence, being torched accidentally by children in 1894.

Meister also states in her 2003 publication that “the Saratoga racetrack has been the subject of two books by contemporary historians, but the identity of Warren as its architect has not been noted.”

The Saratoga Association contracted with the firm of the previously mentioned Andrew Robertson to build the iconic clubhouse/grandstand complex from the Warren design.

Certainly Gottfried “Dutch Fred” Walbaum is never fondly recalled in Saratoga Springs, as his ignominious operations seriously imperiled racing at the Spa. It took the foresight of Richard T. Wilson, recently re-honored with his name on the mile course, to form a syndicate of interested sportsmen including William C. Whitney as President, to buy out Walbaum’s interests in late 1900 and expel his injudicious methods. However, all of us who admire Saratoga’s very recognizable stately crown, must bear in mind that Walbaum made this reality happen.

The Whitney and Wilson-led Saratoga Association began their operation of the track in 1901. Following that season, extensive changes were made by the Empire City track designer Charles Leavitt, increasing the size of the oval and repositioning its orientation on the grounds. This involved moving all the buildings on the property, with the clubhouse, grandstand and betting ring relocated.

To accomplish the rearrangements the grandstand was separated into three sections, and reset as separate units, with the areas between becoming major additions which increased the overall length of the structure. Just prior to the opening of the reconfigured track in June of 1902, the local Saratoga Association office was destroyed in the Arcade Building fire with a regrettable loss of life, and many irreplaceable records of the recent rebuild.

Through the succeeding years further alterations were made, with the Warren-designed clubhouse and its delightful two-story veranda and conical turrets replaced in 1928 by the present multi-tiered turf terrace designed by Samuel Adams Clark. The betting ring, inactive since the introduction of pari-mutuel wagering in 1940, was torn down in 1964, replaced by a 550-foot addition to the east side of the grandstand, which attempted to include Warren’s roof treatments. Architect Arthur Froelich and assistant Robert Krause ordered installation of new slate over both old and new structures.

Since that time, the Victorian gem has taken on its so identifiable appearance, decorated with sculptured finials in a warm patina of tarnished copper, which so many fans of racing in Saratoga find a joy to behold.