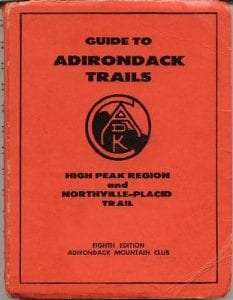 In the passages below, excerpted from a 1942 article appearing in a regional newspaper, there is a glaring error. Can you spot it?

“Dr. Orra A. Phelps, Fort Plain School Physician, was the principal speaker at the initial meeting of the Burroughs Nature Study Club…. He spoke on Guide to Adirondack Trails. In his talk, Dr. Phelps outlined various trails leading to the most picturesque spots in the upper Adirondacks from information gleaned first-hand by the speaker, who is an enthusiastic mountain climber.

“He called particular attention to Mt. Colden, located between Mt. Marcy and Mt. McIntyre, one of the few points, he said, that has been preserved in its original state and which he characterized as the heart of this wilderness of nature. Dr Phelps also described the scenic beauty discovered on a visit to the Ausable Club in the vicinity of Keene Valley. The speaker is chief author of the book, Guide to Adirondack Trails.”

I can add that Dr. Phelps was born in Connecticut and lived in Canton in St. Lawrence County before the family settled in Wilton in Saratoga County. A strong educational background highlights an impressive resume, outlined only sparsely here: taught geology and zoology at the University of New Hampshire; attended Johns Hopkins for medical training; interned at Saratoga and Albany hospitals; was a school physician for many years; was an excellent naturalist and botanist; was president of the New England Botany Club; joined the navy in 1943; advanced to lieutenant commander in the Medical Corps; served a long stint with the Veterans Administration; was director of the Nature Museum at Adirondac Loj; was on the governing board of the Adirondack Mountain Club; was a poet, author, prolific lecturer on a variety of subjects, hiker, mountain climber (summitted Marcy more than 30 times), an Adirondack 46er, and more, which hardly seems possible.

If you’re old enough and/or well versed in Adirondack history, you spotted the mortifying error that appears five times in the newspaper passage above: pronoun usage (“his” once and “he” four times). For me, the mistakes accentuated just how impressive Dr. Phelps was, so much so that a reporter, who apparently did not attend the event covered by the article, assumed that school physician, principal speaker, enthusiastic mountain climber, and chief author automatically referred to a man. Dr. Phelps was emphatically not a man, but instead a groundbreaking woman on many fronts.

For a writer, there’s no good excuse for the error. Yes, the name Orra is unusual, but its ambiguity is the very reason a reporter would confirm the gender. As for the editor … well, never has the cute saying about “assume” been more fitting. The same mistake was made by other writers on at least two occasions, but truth be known and gender aside, Dr. Orra Phelps is one of the most impressive individuals ever to have trod the Adirondacks. Her life and accomplishments are detailed in a chapter of Breaking Trail: Remarkable Women of the Adirondacks (Purple Mountain Press, 2004) by Peggy Lynn and Sandra Weber, and in Doc: Orra A. Phelps, M.D., Adirondack Naturalist and Mountaineer (North Country Book, 2001) by Mary Arakelian. 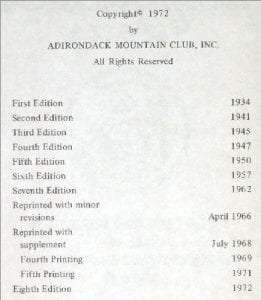 The good doctor came to mind recently when I happened upon an article dated September 25, 1934 with the headline “Adirondack Guide Book Published; Club Prepares Data on Mountains and Trails; Includes Maps; Work is Culmination of Several Years Effort by Committee.” The editor, co-author, and a member of the Adirondack Mountain Club’s guidebook committee for several years, was Orra Phelps.

Titled Guide to Adirondack Trails, Northeast Section, it is the primary ancestor of so many ADK guidebooks that have shepherded and eased the hiking and climbing trips of hundreds of thousands (maybe millions?) of visitors.

I certainly benefited during decades of exploring the mountains while living within shouting distance of the Canadian border. Twice a week I drove to locations as far away as the central Adirondacks (anything within two hours), hiked and climbed all day, and returned home just in time to clean up and leave for my night job. Key to making such a tight schedule work were good guidebooks. The descendants of Orra Phelps’s book eliminated the guesswork of where and when to start, and how many miles of walking were involved.

I recall using the orange-covered Guide to Adirondack Trails: High Peak Region and Northville-Placid Trail, Eighth Edition (1972, wire-coil bound), until it was badly beaten up from years of frequent use. The coil binding meant it could lay flat and remain open to a particular page, à la cookbooks, which was pretty handy. On a mountain top, you could sit, eat, drink, skim the text for points of interest and use the binoculars to scan for them, all without having to hold the book open.

I liked it much better than the perfect-bound ones of later years (perfect is the glue binding used on most soft-cover books), which were sturdier but less user-friendly. The green-covered Eleventh Edition, which traveled thousands of miles of trails in my packs, comes to mind, but there were others, and all were important helpers on many outings. No trips were even considered without maps, compass, and guidebook, even if the path was familiar. 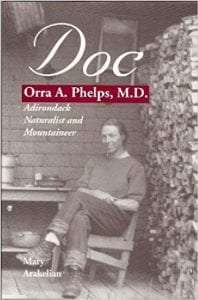 Besides the one I carried, there was always a shelf copy for reading at home. In fact, my shelf copy of the Twelfth Edition (1992) contains a dedication page to the memory of Dr. Phelps, so eloquently described by Dr. Edwin Ketchledge in these selected snippets:

“In her early seasons in the high peaks, Orra explored the mountains and the trails, then edited the first edition of this trail guide in order to lead others to the joys and satisfaction of the wilderness experience…. In that first edition, published in 1934, she proposed a series of guides to trails throughout the Adirondacks…. Her dream has become an ongoing reality, and it seems only appropriate that we should rededicate this twelfth edition to our dear friend, Orra A. Phelps.”

Well said, for sure. But for me it’s hard to top his opening line, which summarized who she was, and in its final words suggests she still in some way accompanies us on every mountain trek:

“If it is possible for any one individual in her full life of achievement to personify the dual spirit and purpose of the Adirondack Mt. Club, Orra A. Phelps shines as our finest companion.”