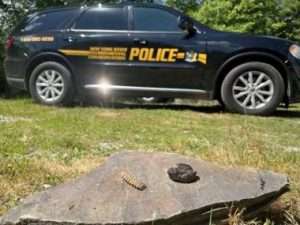 According to a press release issued by DEC, in July, Environmental Conservation Officers in Orange County, NY received a tip from the Woodbury Police Department about a rattlesnake found dead in a driveway with its head cut off and rattle missing.

The ECOs interviewed multiple parties before zeroing in on a main suspect. The man admitted to killing the snake by chopping its head off and said he did it because he had never seen a rattlesnake and was afraid. The Officers educated the man on the important role of timber rattlesnakes in the ecosystem and informed him the snakes are protected under State Environmental Conservation Law.

The subject received two tickets for the illegal take and possession of a protected species. ECOs remind New Yorkers that rattlesnakes do not typically attack people unless threatened or provoked and advise people not to panic, keep a safe distance of six feet or more, and let the snake move along on its own.

Photo of seized rattlesnake head and rattle provided by DEC.