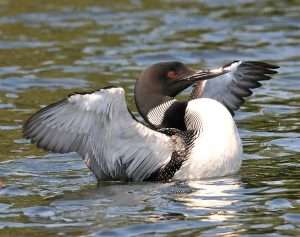 On the New Hampshire lake where I spend much of the summer, loon calls are so common that I sometimes take them for granted.

The sounds of the common loon (Gavia immer) are iconic of wilderness and have been described as haunting, plaintive, maniacal, other-worldly, even wolf-like.

Recently, I’ve started listening more carefully to the beautifully patterned black and white birds – and wondering what they were communicating. Not surprisingly, there is far more to loon language than meets the ear. Their varied sounds are acoustically complex and serve different purposes. They even have different meanings, depending on the environmental and social context.

The comparison of loon voices to wolf howls makes sense, according to Harry Vogel, senior biologist with the Loon Preservation Committee. “Both creatures evolved in the northern forested landscape and have to overcome the same challenges to communicate over long distances,” he said. “These are the sounds that work in these conditions.”

Ornithologists describe four types of loon vocalizations: wails, yodels, tremolos, and hoots. The most often heard (and most wolf-like) is the wail: three or four drawn-out notes serving as a location check-in. (I’m over here! Where are you? I’m over here!) Wails are typically heard at night, Vogel says, when the lake is quiet and visual cues are not available. Both adult male and female loons make this sound.

The yodel is an aggressive call a male loon makes when disturbed by an intruder. It consists of an introductory phrase of three or four ascending notes, followed by a series of two-syllable repeat phrases – as many as 28. Male loons may extend their necks parallel to the surface of the water during yodeling, either keeping their bodies close to the water or rising out of the water and extending their necks forward.

“In effect, the yodel of a male loon is his voice, recognizable to humans who know it and probably also to other loons,” says Jay Mager, a behavioral ecologist at Ohio Northern University who has studied loons for more than 30 years and has focused on the yodel. “Each male’s yodel is unique in terms of timing, frequency, and frequency modulation. It’s possible that it communicates three types of information: not only about identity, but about how big and bad he is, and how motivated he is to escalate a conflict.” 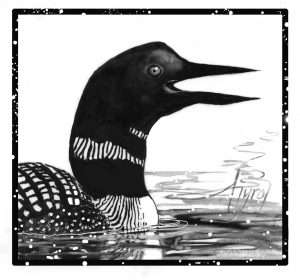 Scientists have uncovered many nuances of loon communication. For example, the male’s yodel changes with age, indicating size and condition. It also changes when he moves to a new territory, becoming distinct from what he sounded like before and also distinct in his new neighborhood. As Mager says, “Communication is a beautiful way to avoid a fight.” Which is critical to survival, since loon confrontations can be fatal.

The “laughing” call that thrills Ethel and Norman Thayer in On Golden Pond is the tremolo. This call is usually a response to a perceived threat such as a boat, an intruding loon, or an eagle or other predator. Loons use the tremolo during territorial interactions, or while flying over a territory occupied by other loons.

The last call, and the one least often heard by humans, is a hoot or coo used over short distances between partners or between parents and chicks. Chicks are generally able to vocalize within one day of hatching and will peep or yelp when in distress. By one week of age, chicks can produce high-frequency wails. By three months, they have traded peeps and yelps for hoots and tremolos, and males are able to yodel by two years of age, which is when they reach sexual maturity.

Loons vocalize most frequently during breeding season – especially with wails, yodels, and tremolos. These sounds are often made during nighttime, when conditions allow for better long-range transmission. Loons overwinter on the New England coast and rarely make their signature calls, mainly using hoots to communicate.

As for how loons produce their singular sounds, scientists are still studying the anatomy of the loon’s syrinx to determine the exact mechanism. While much has been discovered, Mager says, “The more you learn about it, the less you know. There’s so much more to understand.”

You can learn more about loons in these stories from the New York Almanack.