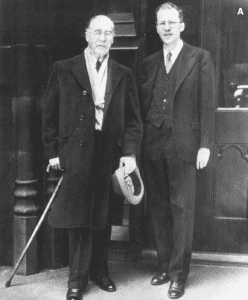 And we could have talked about Lake George. 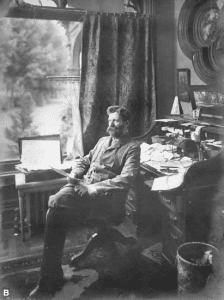 In 1904, Lake George summer resident George Foster Peabody recruited Melish’s father, the Reverend J. Howard Melish, to be rector of Holy Trinity (as the church was then known), a post he would retain until 1949.

Peabody, who was a pillar of the church, bought a cottage on Lake George for Rev. Melish and his wife, the former Marguerite McComas of Cincinnati, and their two sons.

The house, decorated, it is said, by Katrina Trask (whose funeral services, by the way, were conducted by Rev. Melish at Holy Trinity in 1922), was located in Lake George Village on a site now occupied by Scotty’s motel and Scrimshaw Estates. According to local historian Bill Gates, someone set fire to the house in the 1970s.

A Swedish nanny whom the Melishes brought with them to Lake George, Anna Christina Forsell, married another Swedish immigrant, Emil Strand. Strand, of course, was superintendent of the Lake George Club for fifty years and the couple became Lake George residents, living in the building on Club grounds known today as Strand Cottage.

During his years on Lake George, Reverend J. Howard Melish was a controversial figure, allied with John Apperson, Irving Langmuir, Kenneth Reynolds and others in the effort to force the mill at the foot of the lake to stop manipulating the lake’s water levels for its own benefit. The water levels at his own home, he said, were so low he was deprived of the use of his boat and docks. (The controversy about the dams at the foot of the lake and their effects on lake levels had been percolating for 200 years – the first dam was built in 1798.) However controversial Rev. Melish was on Lake George, he was even more controversial in Brooklyn.

In 1949, the Bishop of the Diocese of Long Island and the Church of the Holy Trinity’s lay governing board, or vestry, sought to oust him from his post, largely because he refused to fire the assistant rector, who also happened to be his son, the Rev. W. Howard Melish.

Howard Melish was chairman of the National Council of American-Soviet Friendship, a target of Senator Joseph P. McCarthy’s anti-Communist campaign. In 1948, the U.S, Attorney General labeled the group a subversive organization, which led the Bishop and the vestry to urge the elder Melish to dismiss his son. They had ruled “that certain of the Assistant Rector’s outside activities” (i.e. the subversive ones) “were detrimental to the interests of Holy Trinity Church.” 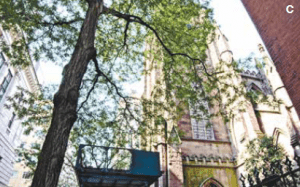 (In addition to chairing the National Council of American-Soviet Friendship, Howard Melish helped playwright Arthur Miller purchase a home for W.E.B. Dubois in Brooklyn Heights, making DuBois the first African-American to reside in the neighborhood, and associating with Paul Robeson.)

“Not since the last century, when Henry Ward Beecher kissed Mrs. Tilton, has fashionable Brooklyn Heights had a clergyman as controversial as the Rev. William Howard Melish,” Time magazine reported. Parishioners came to the defense of Rev. Melish and his son, impeaching the conservative vestry.

As the dispute moved to the courts, the elder Melish publicly defended himself, stating, “In these days when the preservation of religious liberty and freedom of speech are as important to our democracy as at any time in the history of our nation, this invasion of the rights of a congregation and of its ministers raises an issue which the church must face.”

While the courts defended the right of the Bishop to remove Melish from his post, they allowed him to remain in the elegant rectory on Pierrepont Street.

In his last sermon, delivered in 1952 at the age of 78, Rev. Melish stated, “Every forward movement in history begins with the spirit of revolt in man.”

The Reverend J. Howard Melish died in the rectory in 1959. The diocese was finally able to rid itself of the younger Melish by closing the church and abolishing the parish altogether. The church reopened in 1969 and the parish was reconstituted as the Church of Saint Ann and the Holy Trinity – the church that I knew. Howard Melish was invited to return to his home parish as the assisting priest.

“I never considered the dispute a personal one,” Howard Melish told the New York Times. “It was a wild, hysterical period, when the Cold War started. Now we’ve come full circle.”

Before George Peabody’s death in 1938, he and Melish the elder “found themselves akin on social issues, and spent many hours discussing problems of the day,” according to Peabody’s biographer.

Melish was known as one of the country’s leading liberal ministers and advocated an active role for the church in social affairs, supporting labor unions, welfare for the aged and the indigent, civil rights and public housing.

Perhaps Peabody would have supported Melish in his fight with the vestry and his bishop.

Despite the fact that Peabody was among the foremost capitalists of the era, he was also a liberal, both a prominent Democrat and a committed democrat.

He paid for Shepard Park and played a prominent role in creating Wiawaka and preserving Prospect Mountain, Hearthstone Park and Diamond Island, all for the use of the public. In fact, Peabody did more to ensure the average citizen’s enjoyment of Lake George than any other single individual.

In recognition of those efforts, John Apperson and some others purchased French Point, the land at the base of Tongue Mountain which was once the site of General Electric’s retreat for its workers, and donated the land to the Forest Preserve in memory of Peabody.

It is an affirmation of another interest shared by Peabody and Melish – the preservation of the natural beauty of Lake George.

Photos, from above: the Rev. Dr. John Howard Melish (left) with his son, the Rev. W. Howard Melish, photographed in Brooklyn Heights, 1949; George Foster Peabody; Brooklyn Heights: Saint Ann’s School, left, and Saint Ann and the Holy Trinity Church, right; and the Melish house in Lake George Village, sometime after 1928 by Fred Thatcher, courtesy of the Historical Society of the Town of Bolton.