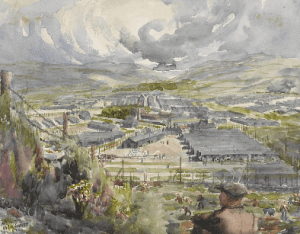 The use of islands as off-shore detention centers has a parallel history. The government of Charles I locked up its opponents at Jersey, Guernsey, or the Isles of Scilly. Having lost the English Civil War, Charles I himself was incarcerated in Carisbrooke Castle on the Isle of Wight. Faced with continuing sedition and agitation, Charles II sent several former leaders of the Interregnum into island isolation.

Cut off from the mainland, prisoners were deprived of contact with family and friends and doomed to a solitary life. Remoteness allowed the authorities to install a hostile regime without legal checks and balances. Island detention became a tool in expelling criminals or political opponents (Robben Island for example) from society. The reputation of Alcatraz Prison until its closure in 1963 was a notorious one. To this day, Rikers Island in the East River remains the location of New York’s main jail complex.

In the twentieth century island detention emerged in two different guises, one to quarantine those who were suffering from contagious diseases, the other to intern enemy aliens during two world wars.

An “enemy alien” is a foreign national coming from a country at war with his/her country of residence. In 1766 William Blackstone published his influential Commentaries on the Law of England in which he stressed that during a time of war “alien enemies have no rights, no privileges.” The Crown exercised absolute power.

On August 4th, 1914, Britain declared war on Germany. The next day Parliament passed the Aliens Restriction Act, declaring every citizen born in Germany or Austria-Hungary an enemy alien who was not permitted to mail a letter; travel more than five miles from their local police station; or own a camera or a car. Only suspect aliens were to be detained.

That intention changed on May 7th, 1915 when a German submarine torpedoed the British liner Lusitania, killing more than a thousand civilians. Resistance to mass internment vanished overnight.

The government announced that all male enemy aliens aged seventeen to fifty-five – naturalized or not – would be locked up for the duration of war. Many of them had settled in Britain years before, some families had been resident for generations. Internment damaged the lives of those detained, breaking up families, and disrupting social networks. It resulted in the destruction of well-established German communities in Britain.

How does society deal with large numbers of internees? Due to their natural remoteness, islands have been used as prison sites throughout history, from Patmos to St Helena or Devil’s Island. The British authorities sent the German prisoners across the Irish Sea to the Isle of Man where the tiny village of Knockaloe became a complex of wooden sheds, housing 25,000 internees behind barbed wire.

The same policy of interning those civilians who were born in enemy countries on the Isle of Man was followed during the Second World War. When Winston Churchill made his infamous call to “collar the lot,” the British government interned almost 30,000 German and Austrian – mostly Jewish – exiles in May and June 1940.

Originally classified as refugees from Nazi persecution who posed no threat to national security, they became victims of a hysterical right-wing press that portrayed them as a potential fifth column of Fascist agents. 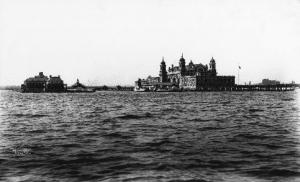 Opened in 1892, Ellis Island served as a stopping point where immigrants were processed. During the first two decades of its existence, the island was not a detention center for unwanted aliens. That changed in 1917 when America entered the First World War. The Justice Department prepared a list of some 480,000 German aliens. Accused of spying for or supporting the enemy, more than 4,000 of them were detained on Ellis Island.

On December 8th, 1941, one day after the attack on Pearl Harbor, President Franklin Delano Roosevelt declared war. Immediately afterwards New York’s Mayor Fiorello La Guardia, who also acted as Federal Director of the Office of Civil Defense, ordered Japanese-Americans to be “held in custody indefinitely.” More than 1,000 businessmen and community leaders were arrested and interned on Ellis Island and later at Camp Upton on Long Island.

The Mayor directed that Japanese nationals be confined to their homes pending a decision as to their status. Clubs and meeting places were put under police guard. The New York Times reported that officers went to every Japanese restaurant in the city, let diners finish, and then shut the business down. Roosevelt’s Executive Order 9066 was issued on February 19, 1942, and triggered the internment of 120,000 American citizens of Japanese descent in ten different “relocation” camps across the United States.

La Guardia knew Ellis Island well. Born in New York into an Italian immigrant family, he had worked from 1907 to 1910 as an interpreter at Ellis Island’s inspection station while attending law school at night. Having qualified, he began representing those who appealed against repatriation. Supporting immigrants gained him the respect of newcomers and their communities. It would launch his political career in a metropolis where more Italians lived than in Naples, more Irish than in Dublin, and more Greeks than in Athens.

The Mayor rejected restrictionist policies in a climate of anti-(East European) Jewish and anti-Italian bias. He was less open-minded when it concerned Asian Americans, a group that had long suffered prejudice and discrimination (prevented from buying land or voting). No Japanese-American citizen or Japanese national residing in the United States was ever found guilty of sabotage or espionage.

News of suffering at Ellis Island shifted public perception. The New York Times reported that the island’s name had become ‘a symbol for being unwanted by America’. Soon after the war the camp was closed. Acknowledging that mass internment of Japanese-Americans could not be justified, either morally or militarily, President Jimmy Carter eventually apologized for the draconian measure. 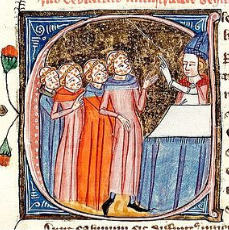 Mass internment of enemy aliens was driven by anxiety rather than evidence. A climate of panic led to a whole group of individuals being treated as guilty, allowing for the creation of legal methods that violated its civil liberties. Islands of exclusion however were not just installed in times of war. Fears of infectious disease also caused calls for sufferers to be banned from society.

Leprosy is a chronic infectious disease caused by the “mycobacterium leprae” (identified in 1873 by the Norwegian scientist Gerhard Armauer Hansen). It affects the patient’s nerves, respiratory tract, skin and eyes. The illness causes the deformation of features, especially of the face and limbs. Segregation was recommended for prevention.

For thousands of years this “mysterious” disorder had invoked a disturbing imagery of disfigured bodies. The Old Testament identified leprosy as a visible manifestation of a transgression against God, sent by Him as punishment for sin (Book of Leviticus). This portrayal of leprosy contributed to stigma-formation. Persons with the disease were isolated, ostracized, and condemned to a lifetime at the margins of society. Leprosaria were built in remote lands to quarantine patients. Leprosy was dreaded, not because it killed but because it left one alive with no hope or prospect.

The bacterium responsible for leprosy is believed to have spread from East Africa, reaching Europe by the late fifth century when the first leper houses were documented. Lepers were treated as pariahs who were quarantined from society until the Church intervened. Managed by religious orders, clerics took care of the afflicted. Lazar houses offered a monastic refuge for the leprosy affected – religious isolation in order words. 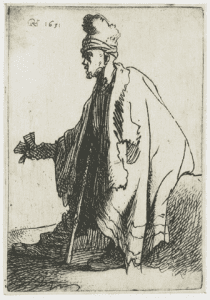 Sufferers were kept away from the general public partly because it was believed that the disease was contagious and partly because of the public anxiety associated with the “divinely ordained” condition. The fear of lepers returned during the nineteenth century as increased travel in conjunction with intense colonial activity led to a growing number of infected. It forced governments to take action. When the First International Leprosy Conference took place in Berlin in 1897, it was agreed that isolation was the best method protecting the public from the “scourge.” The island idea re-emerged.

In 1865, the Hawaii authorities passed an “Act to Prevent the Spread of Leprosy.” Land on the island of Molokai was purchased to receive the first contingent of leprosy-affected people in January 1866. Between that year and 1905, nearly six thousand patients were exiled into life-long quarantine to leprosaria at Kalawao and Kalaupapa. It was not until 1969 that the legislation requiring involuntary lifetime isolation come to an end.

Molokai set a precedent. In Europe the example was followed on Spinalonga, a barren island just of Crete’s coast. Nicknamed the “island of the living dead” or “walking corpses,” it housed a leper community from 1903 until 1957 where, as in all colonies, patients were deprived of all civil liberties. 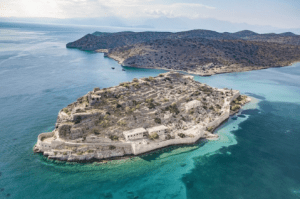 With the rapid increase of immigration from Russia, the Middle East and Asia, the number of leprosy cases in America increased. In 1921, the United States Public Health Service took over the state-controlled leprosy hospital in Louisiana (the first known cases of leprosy there were recorded in 1758). It was renamed the National Leprosarium, but became better known as Carville. At its peak, the institution housed four hundred patients.

As New York was assimilating huge numbers of immigrants, many were forced to reside in overcrowded and unsanitary living quarters. Contagious diseases spread quickly. The afflicted were removed from the city’s teeming streets and forced into quarantine at Riverside Hospital on North Brother Island, located on a treacherous section of the East River named Hell Gate. 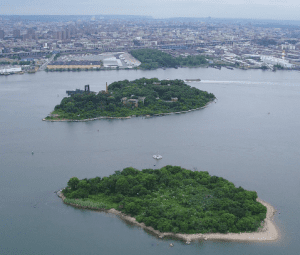 From 1885 until its closure in 1963, the hospital was home to hundreds of patients who suffered from various communicable diseases. One of those was Typhoid Mary Mallon, an Irish immigrant cook who spent over thirty years in quarantine there. Patients lived under poor conditions in tents and huts around the hospital. Life at Riverside was the “black hole of Calcutta.” Those struggling with leprosy were confined to shacks on the perimeter. They were outcasts amongst the shunned.

Stigma is a social process characterized by blame, rejection, and – eventually – exclusion of a person or group identified with a particular health problem or mental disorder. It is a “dynamic” process as stigmas can be reduced over time and even eradicated.

The advent of effective drugs in the 1940s drastically changed the course of disease and in many countries compulsory patient isolation was deemed no longer necessary. Elsewhere outdated laws remained in force. In the United States leper colonies continued to operate until 1975 when policies of isolation were finally disbanded (Japan revoked mandatory isolation of patients as late as 1996).

The “cursed” term leprosy (the L-word) had become a synonym for suffering and isolation. Language plays a fundamental part in the fostering of social stigmas. At the Fifth International Leprosy Congress in Havana (1948), a resolution was unanimously passed recommending that use of the term “leper” be abandoned.

Clinicians and professional researchers then insisted that the word leprosy be banished and replaced with “Hansen’s disease.” It was a vital step in changing government policies that would finally lead to the abolishment of leprosaria and the reintegration of patients into the community.

Illustrations, from above: view of a PoW Camp, Isle of Man, April 1918 by George Kenner; Ellis Island in 1903 as seen from New York Harbour (New York Historical Society); Omne Bonum, a fourteenth century bishop instructing clerics with leprosy: Medieval depictions of leprosy commonly showed the patient to have red spots by James le Palmer (British Library); The leper (Lazarus clep), 1631 by Rembrandt; the island of Spinalonga and its abandoned leper colony; and abandoned North Brother Island (background) and South Brother Island in the middle of East River, less than a mile from Manhattan.