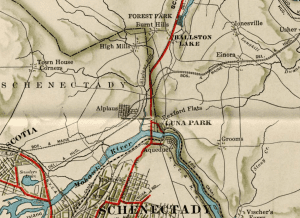 The map was drawn so as to facilitate the sale of the entire property and make the area into individual parcels that people could buy. Thus ended the almost 25-year history of one of the most famous amusement parks in Saratoga County and began the process of opening up a large section of Ballston Lake to residential development. 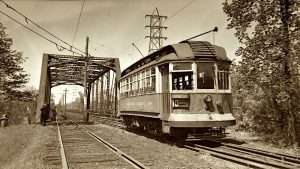 It had all started when the owner of the trolleys running from Schenectady to Saratoga Springs, the Schenectady Railway Company, decided to create a place of amusement  – a trolley park – to boost ridership, especially on weekends. 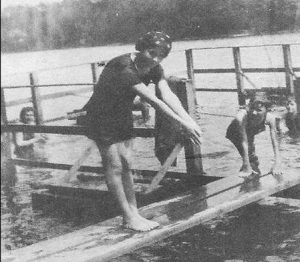 The Railway Company, feeding on the desire of people at the time to pursue leisure time activities, built Forest Park.  A sign on the current-day bike path which sits in the path of the former trolley tracks rightly tell what it offered:

“Forest Park, which was opened in 1904 by the Schenectady Railroad [sic] Company. Cottage or camp life, restful recreation, good boating and fishing, Sunday concerts, picnic grounds, dance pavilion, merry-go-round and a good room at the Inn.”

The all-inclusive “resort” (of sorts) catered to city residents who wanted to get away from work and city life and also provided a place of entertainment for local people: ice cream and other fair foods, boating on the lake, a merry-go-round and other rides and swimming. (It was a time when fewer people could swim, so a structure with a bottom and sides was built  – known as “the crib” – to prevent drownings.) Visitors dressed in their best attire attended regular dances at the lake-side “casino.” Boating was one of the highlights of the park, where for twenty-five cents visitors could ride on the Comanche or another of the many watercraft. 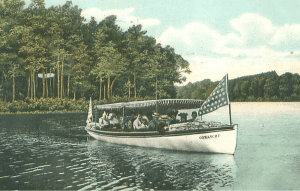 The merry-go-round included handmade wooden horses, each weighing about 300 pounds. Grabbing one of the high-hanging brass rings dangling from the upper part of the ride would net you a free ride (worth five cents) if you showed the attendant that you had secured one. The merry-go-round now sits in Congress Park in Saratoga Springs.

Historic newspaper stories describe many of the parties and events held at Forest Park. The Salvation Army used the facility as a “gathering place for poor mothers and children” in August, 1915. The National Association of the Deaf held a three-day outing there in 1918. 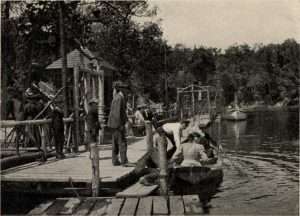 On a more regular basis, the Rubens Orchestra played every Tuesday, Thursday, and Saturday in 1919, according to the advertisement in the Ballston Spa Journal. In 1924, there were Tuesday and Thursday dances at the bargain price of ten cents, with Whitbeck’s Novelty Orchestra performing.

In 1927 however, under pressure from other trolley parks, such as Luna Park closer to Schenectady, and the rising popularity of automobiles, the company closed the park and sold the land for development. Lots were sold until the 1950s by the Forest Park Association and the lake became primarily a residential haven for summer visitors and, as time went on, for year-round residents. 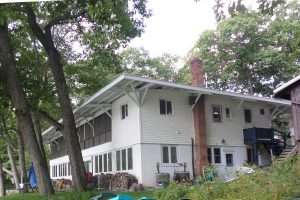 There are remnants of Forest Park. The inn and the dining hall still exist, now as private homes. There are small reminders in trees and on buildings of the old amusement park days as well as one of the original outhouses which still stands. And of course you can still visit the merry-go-round in Congress Park.