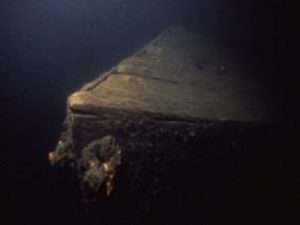 The Adirondacks remain one of the most sought-after destinations for outdoor recreation. From hiking serene mountain passes to hitting the bike trails, it truly has something for everyone – even historic ship divers.

Lake George was the site of many pivotal engagements in the founding years of our nation, including the French and Indian War and the American Revolution. Evidence of its witness are but a stone’s throw from shore where Fort William Henry, in the cold, dark waters.

The Sunken Fleet of 1758 consists of the remains of seven original bateauxs; flat-bottomed warships, commonly used by both sides in the French and Indian War. The eighth, is a replica built by local schoolchildren in 1997, to help researchers understand the site through future observations.

The Land Tortoise Underwater Preserve Site contains what is believed to be the sole survivor of a distinct class of military vessel only used on Lake George and Lake Champlain in the 18th century. The Smithsonian has designated Land Tortoise as “the oldest intact war vessel.”

The Forward Underwater Classroom is a triangular-shaped trail system of diver stations created with support from The Fund for Lake George. It consists of the motor launch Forward, one of the first gasoline-powered vessels on the lake, an archaeological station on the wreck Penn Yan, as well as interpretive signage about invasive mussels and native underwater vegetation.

Keep in mind that these are unique, historic sites and have unfortunately been the victims of vandals since 1993. To better protect these sites, please follow the guidelines outlined in the DEC Diving Guidelines for New York’s Shipwreck Preserves and be sure to practice Leave No Trace principle 4 and take nothing but pictures. If you observe any violations, report it to the proper authorities at 911.