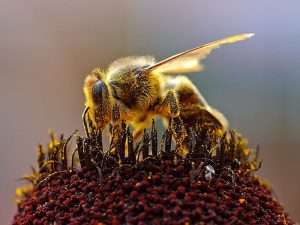 In 2016, concerns over global declines in pollinators led to creation of New York’s Pollinator Protection Plan, which called for an inventory of the state’s native pollinators. Using New York State’s Environmental Protection Fund, DEC contracted with the New York Natural Heritage Program (NYNHP) to develop and implement the survey.

To help design the survey, NYNHP assembled a team of experts from DEC, the State University of New York (SUNY) College of Environmental Science and Forestry (ESF), Cornell University, SUNY Cobleskill, the U.S. Geological Survey, the U.S. Fish and Wildlife Service, the American Museum of Natural History, the New York State Museum, Vermont Center for Ecostudies, and the Xerces Society for Invertebrate Conservation.

During the project, biologists conducted hundreds of field surveys across the state, compiled data from museum collections, and reviewed observations from citizen scientists. Hundreds of volunteers provided tens of thousands of insect specimens, photographs, and observations. In total, biologists gathered more than 230,000 insect records. Using data from the study, NYNHP scientists generated maps of current and historical distributions and seasonal observation charts for 451 species.

Findings from the study confirm concerns about the health of some pollinator populations in New York State. The survey found that between 38 and 60 percent of the species studied are potentially imperiled or critically imperiled. Although the survey documented 16 bee and fly species for the first time in New York State, recent sightings or records could not be confirmed for 79 pollinator species previously recorded in New York. The study found that more than one-third of the native pollinators surveyed are at risk of becoming extinct in New York.

Pollinator populations can be helped by conserving habitat, controlling invasive plants, changing mowing regimes, converting lawns into meadows, paying attention to the siting and density of honey bee hives to reduce competition and spread of disease to native species, controlling deer browsing of the understory, retaining logs and snags in forests, and reducing unnecessary outdoor lights for nocturnal species.

Pesticides also represent one of many factors that stress pollinators, and neonicotinoids in particular have been identified as a group of pesticides that, in general, are highly toxic to pollinators. Reducing pesticide use is another key way to help pollinators and earlier this year, DEC announced actions to limit the unrestricted use of pesticides that can harm bee and other pollinator populations.

DEC is reclassifying certain products containing the neonicotinoid (neonic) insecticides imidacloprid, thiamethoxam, and acetamiprid as “restricted use” to ensure applications are limited to trained pesticide applicators in specific situations. It’s hoped that by restricting the use of these pesticides, DEC will be able to collect new data to determine where, when, and how they are used, as well as their potential impacts. For more information on that effort, visit DEC’s website.