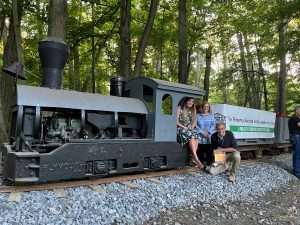 Friends of Taconic State Park (FTSP) has received a $100,000 grant from the William G. Pomeroy Foundation to support the development of The Pomeroy Family Railroad at Copake Iron Works.

Funding from the Pomeroy Foundation, which is a private, philanthropic organization based in Syracuse, will support the development of a 1,000-foot loop railroad around the historic Copake Blast Furnace, as well as a station house. Visitors will have the opportunity to tour the historic location in one of two train cars on the site’s railway system.

“In recognition of the importance of the Pomeroy Foundation’s grant, we are delighted to announce tonight that henceforth the Copake Iron Works Railroad will be known as The Pomeroy Family Railroad at the Copake Iron Works,” Deborah Cohen, FTSP Treasurer, said during her remarks at the annual meeting. Event guests included Deryn Pomeroy, who serves as Trustee and Director of Strategic Initiatives at the Pomeroy Foundation, as well as Carrie Berse, the Foundation’s Executive Director.

“For my dad and I, this exciting project at Copake Iron Works is especially meaningful to both of us given our family’s history in the area,” said Pomeroy, daughter of Pomeroy Foundation Trustee and Founder Bill Pomeroy. “We are proud to provide this gift to help make this railroad experience a reality. The volunteers working behind the scenes have been nothing short of impressive with their commitment to this project, and we congratulate them on their hard work and can-do spirit.”

In addition to naming The Pomeroy Family Railroad, several individual components, including the engine and passenger cars, will be named for ancestors of the Pomeroy family, which has deep roots in Copake Falls. “Friends of Taconic State Park has a special connection to the Pomeroy family and to the Foundation,” Cohen said. “Lemuel Pomeroy was the founder of the Copake Iron Works in 1845. Lemuel and family members are buried in the nearby cemetery of the Church of St. John in the Wilderness in Copake Falls. One hundred seventy years later, when the Friends set out to restore and preserve the Copake Iron Works historic site located within Taconic State Park, the Pomeroy Foundation was a major contributor to our first capital project.”

Cohen added that the Pomeroy Foundation has continued to support FTSP through its roadside marker program, its Museum Association of New York fellowship grants and through gifts to the annual fund. “The Pomeroy Foundation is delighted to support this worthy project at the historic Copake Iron Works,” said Berse. “The outstanding progress made to date on The Pomeroy Family Railroad underscores what an engaging history experience this is, and will be, for area residents and visitors when completed. We look forward to seeing this unique and exciting project come to fruition.”

Friends of Taconic State Park identified the re-creation of the narrow gauge railroad that once circumnavigated the Copake Iron Works as a priority project about 10 years ago. Following several years of planning and permit seeking, construction of the railroad began in September 2021. The train is operational now, but will not be open to the public until completion permits are approved by the New York State Department of Labor.

Edgar Masters, a founding member of FTSP and the volunteer construction manager for the railroad project, anticipates that the necessary permits will be approved by spring 2023.

Friends of Taconic State Park was established in 2008 to support cultural, recreational and educational activities within the park with the preservation of the Copake Iron Works National Heritage Area Site its priority. The group is implementing a 20-year plan to create a pre-eminent site of historic iron-making and a national destination for tourists in Copake Falls. The Copake Iron Works Visitor Center features a video documentary chronicling the history of the site and an extensively interpreted trail from the Copake Iron Works to the Bash Bish Falls, for which trail maps are available. To learn more about Friends of Taconic State Park, visit their website or email info@friendsoftsp.org.