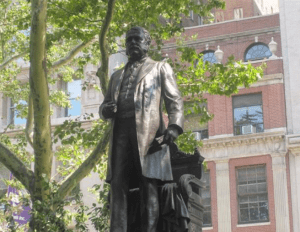 In the late 1840s it was regularly traversed by the only former resident of Schenectady and the only graduate of Union College ever destined to occupy the office of President of the United States. 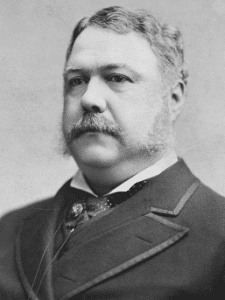 Chester Alan Arthur was born in Fairfield, Vermont on October 5, 1829, the son of William Arthur and Malvina Stone. He moved often in his youth with his father, a Baptist minister, whose last church still stands beside Route 9 in Newtonville, in Albany County, now serving as the Post Office for that community, not far from the house he and his family occupied, and from their final resting place. William Arthur, his relatives, including his son Chester, all rest together at the Albany Rural Cemetery at a grave site marked by the statue of an angel whose presence summons the attention of all who fall within sight of her.

Chester Arthur was admitted to Union College at age 15 in 1844 and graduated at age 19 in 1848. He taught school briefly in several localities not far from his family’s home, attended law school in Ballston Spa, and wound up as a lawyer in the office of Erastus Colvin in New York City in 1854.

Colvin, like Chester’s father William, was an abolitionist. Under these influences it is not surprising to learn that Chester Arthur became an abolitionist as well. In 1854, Arthur’s entry into a career as a lawyer coincided with the founding of the Republican Party, which he joined and served as a member until his death in 1886.

During the years when Chester Arthur was most politically active, the leading figures in Republican Politics were Ulysses S. Grant, President of the United States from 1869 to 1877, Roscoe Conkling, First Republican Senator from New York State, 1867 to 1881, and Thurlow Weed, never an elected official, but a power in Whig and Republican Politics for much of the 19th century.

All of these men operated in a political system characterized as the “Spoils System,” clearly understood by all political participants to mean that if you won the political race you had the power to choose who got which government job and the salary to be paid for it. With a degree of frequency that was increasingly disturbing, it turned out that quite often the person who got the job and the pay did not show up for work and could not do the job when they did show up. But, no matter, as long as the job holder understood that he had to give back a percentage of his pay to the party that elected him, and so long as he did so, he could keep his job.

Chester Arthur, a capable person, made his earliest connection with the spoils system when he, apparently through his acquaintance with Thurlow Weed, got to know Edwin D. Morgan, who had been elected Governor of New York in 1858. Morgan liked Arthur and in 1861, when the Civil War broke out, appointed Arthur Quartermaster of New York State, with responsibility to organize logistical support for all the men from New York who were going into the Union Army.

This was a very big job which Arthur carried out in a creditable fashion. Governor Morgan was reelected to a second two-year term in 1860 but not reelected in 1862, so Arthur, in accord with the standard Spoils rule, lost that role to Democrat S. V. (Sebastian Visscher) Talcott as of January 1, 1863. Talcott, after a short time in the position, was unsparing in his praise of the way Arthur had organized and carried out his responsibility as Quartermaster General. 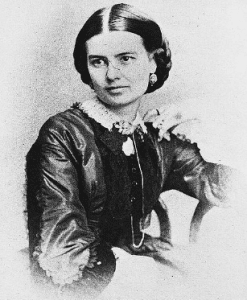 These personal connections may have played a role in Arthur’s decision not to go on active military duty during the conflict but to remain in the city of New York where he lived, continue his law practice, resume political activity, and nurture and increase his “connections,” a way of life at which he excelled.

Through this process he developed a relationship with Roscoe Conkling, Senator from Utica, and, at this time one of the dominant figures in Republican politics in New York. Conkling, a staunch supporter of Ulysses S. Grant during and after Grant’s presidency, was the most important figure in a segment of the Republican Party called “Stalwarts,” and Chester Arthur became one. The term denoted strong support for and loyalty to President Grant.

In 1871, as a reward for his loyalty and hard work in support of the Republican Party, and through the influence of Conkling, President Grant appointed Chester Arthur “Collector of the Port of New York.” This was the plumpest, the sweetest plum of all the fruits available for distribution to the party faithful during this period of American History. An important part of Arthur’s career, it became the subject of controversy when he lost the job after Grant’s term ended and another President decided to use it to reward one of his loyal followers. 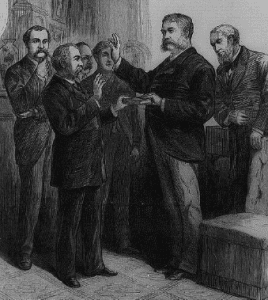 The story becomes one of political conflict as Stalwarts struggle with another faction called “Half-breeds” for control of the Republican Party and the Presidency, and hence the “Spoils.” In the midst of this turmoil, Ellen Arthur loses her life in January, 1880 while her husband is attending a political meeting in Albany, a very sad chapter in Arthur’s life.

Later in that year, 1880, Stalwart Arthur is offered the opportunity to run for the vice-presidency by James Garfield, a “Half-breed.” Against the advice of his friend Roscoe Conkling, Arthur accepts the nomination, and goes on with Garfield to win the election of 1880.

After Garfield and Arthur are inaugurated in March of 1881, a struggle ensues between the Stalwarts and the Half-breeds over issues directly related to the Spoils System, with each faction of the party insisting on its right to control the spoils. Then, in a manner no one could have predicted, events take one surprising turn after another.

First, Roscoe Conkling resigns his Senate seat, thinking he will be quickly re-elected by the New York State Legislature in recognition of his awesome power. But to his consternation, the Legislature does not re-elect him. 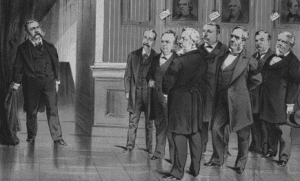 Then, shortly after that, while on his way to attend an event at his Alma Mater, Williams College, President Garfield is shot by Charles J. Guiteau. After a little more than two and a half months, Garfield dies of his wounds, Chester Arthur is sworn in as President on September 19, 1882, and, as a political cartoon of the day shows, courageously faces the skeptical cabinet that he has inherited Arthur himself was apprehensive.

For him, this series of events is, to say the least, unsettling. He did not want to be President, and, many of Arthur’s associates who saw him as the ultimate “Spoils-Man” were repelled at the idea of having him occupy the presidency and use the office as a means to cede the Spoils to his political allies.

For many, the story took an unexpected turn when Arthur, acting in what is often characterized as “a dignified and responsible” manner did not do any of the things his political enemies feared that he would do. All of his biographers quote observers to the effect that everything in his administration of the presidential office turned out to be much better than anyone would have expected it to be. The accomplishment most often cited is his January 1883 signature on the Pendleton Civil Service Reform Act which, however ironically, was the first step in putting an end to the Spoils System.

While he was in office, Arthur’s health deteriorated. Knowing that he suffered from Bright’s disease, he did not seriously contend for nomination to a second term in 1884. He returned to his home in New York City in 1885 where he died on November 19th , 1886. He is interred next to his wife and other members of his family in the Albany Rural Cemetery.

Illustrations, from above: statue of Chester Alan Arthur by sculptor George Edwin Bissell, erected in Madison Square Park in Manhattan on June 13, 1899; portrait of Chester Alan Arthur; portrait of Ellen Lewis Herndon Arthur; Arthur taking the oath as President of the United States on September 19, 1882; and political cartoon showing Arthur facing the cabinet that he has inherited.

Frank Taormina wrote this essay for the Schenectady County Historical Society Newsletter, Volume 56. Become a member of the Society online at schenectadyhistorical.org.