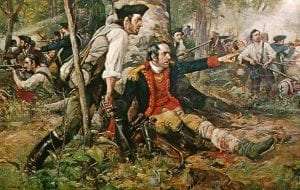 A significant turning point in the American Revolution, the Battle of Oriskany was fought on August 6th, 1777, and is considered one of the bloodiest battles of the war.

During the battle Continental forces led by General Nicholas Herkimer defeated the British army under Barrimore Matthew “Barry” St. Leger in the heart of New York’s Mohawk Valley. It was a hard-won victory, but Herkimer’s troops and their Oneida allies prevented the British from splitting the colonies in two.

The Oneida Indian Nation, in partnership with Fort Stanwix and the Rome Historical Society (RHS) have announced a day of local history education events centered around the annual Battle of Oriskany Commemoration, set for Saturday, August 6th.

Beginning at 4 pm, Arthur Simmons, Executive Director of RHS, and a representative of the Oneida Indian Nation will discuss the history of the Great Oneida Carrying Place during the Revolutionary War, at the Oneida Carry Monument in Downtown Rome. At 7 pm, the annual Solemn Commemoration of the Battle of Oriskany will take place at the Oriskany Battlefield State Historic Site.

This annual ceremony is held in recognition of those who fought in the Battle of Oriskany. It includes a re-enactment of the militia march, a musket salute in memory of the fallen, presentation of wreaths and ceremonial offerings, along with guest speakers.

Then, at 8:30 pm, Fort Stanwix will host an Oneida Indian Nation Movie Night. The event will feature the award-winning animated film My Home: An Oneida Legend, as well as the documentary, The People of the Standing Stone: The Oneida Indian Nation, the War for Independence, and the Making of America.

To attend the Pivotal Role of the Great Oneida Carry presentation, RSVP to Miranda Sherrock at educator@romehistoricalsociety.org or (315) 336-5870. To attend the Oneida Indian Nation Movie Night at Fort Stanwix, RSVP to Valerie Morgan at (315) 338-7730. The annual Battle of Oriskany Commemoration is free and open to the public, no RSVP is required.

Illustration: The wounded Nicholas Herkimer directs his troops at the Battle of Oriskany, August 6th, 1777 by Frederick Coffay Yohn.