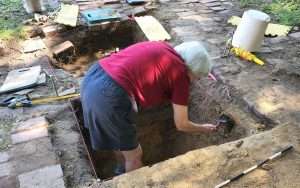 About halfway into the pandemic, I discovered that my friend Amy had become similarly obsessed. So when I found out that the Underground Railroad Education Center in Albany, New York was offering an opportunity to volunteer to participate in a five day dig they had planned for August, I called Amy and said, “Wanna do it?” She replied, “Hell yeah!”

On Monday morning at 9am on the 22nd of August, we found ourselves at 194 Livingston Avenue, the UGRR Education Center’s headquarters housed in the home formerly lived in by Stephen and Harriet Myers who were the most prominent people in Albany involved in the Underground Railroad before the Civil War. 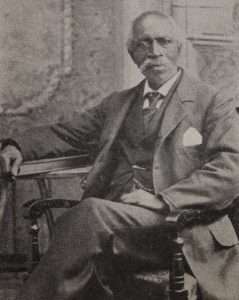 The dig was not in the yard of Stephen and Harriet Myers, but next door in the lot where a building once stood that was the home of fellow Underground Railroad participant, Dr. Thomas Elkins. Elkins, also African American, who is listed variously in the census as a druggist, dentist and physician, was born free in the city of New York in 1819. Elkins studied under three prominent doctors and received additional medical training in Montreal.

Paul Stewart, who along with his wife Mary Liz, founded the Center and purchased the Myers home and adjoining lots about twenty years ago and turned it into a museum, gathered the volunteers and gave us an overview of the workings of the Underground Railroad in Albany.

Archaeologists Matt Kirk, Adam Luscier and Max Blumenfruct of Hartgen Associates oversaw the dig and taught us five amateurs the ropes. The location of the two one-meter-by-one-meter holes was predetermined where the archaeologists thought there might be the remains of an old cistern. We did not find the cistern but we found a lot of other stuff.

First, we removed the bricks that covered the area, (perhaps an old patio) then set the strings that delineated the holes. We started digging. Our efforts were feeble, so the experienced archaeologists went to town, quickly removing the first 10 centimeters of earth into the buckets for us to sift.

Glittering in the bright sun, we picked out pieces of brick and coal, glass, pottery, shell and bone and carefully placed the bits into labeled bags. Cries of, “I think it is a button!” or “It’s either a washer or a Chinese coin!” rang out. Occasionally, we’d call for the archaeologists to help identify a dirt-encrusted artifact leading to interesting discussions. For example, a circular object was identified as part of a sturgeon spine. In the 19th century and before, the prehistoric-looking fish were rife in the Hudson River, until they were hunted to near extinction. The eight-foot-long creatures were piled on the decks of ships like logs, and shipped out as “Albany beef.”

Dig, sift, measure and record, then dig again is how our days went. The stratigraphy, or layers of varying soil types became apparent as we journeyed through time past.

The underground railroad – the system by which people who were enslaved could seek freedom in the north – New York abolished slavery in 1827 – varied over time and was different in different places. Anyone, white or black, free or enslaved, traveled from New York to Albany by way of the Hudson. First there were sailing sloops but by 1840 there were over one hundred side-wheel steamers plying the river. Many of the boatmen or the ”hands on deck” were African American men. Indeed, the US Census reveals that several of the neighbors of the Myers’ and Elkins’ were working as boatmen. 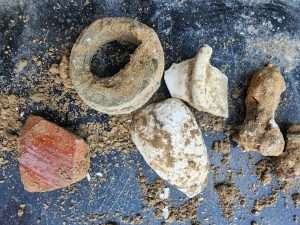 It was easy to imagine small groups of people dogged with determination in their attempt to escape the brutal conditions of violence and unpaid forced labor of the south, breathing a sigh of relief when Harriet and Stephen Myers welcomed them into their ample brick townhouse. If they needed medical attention, Dr. Elkins was just next door.

Upon closer examination, we could conclude that Thomas Elkins was comfortable – in the dirt we found shards of imported from Staffordshire, England transfer dishware and even some Chinese export porcelain. Was it a teapot? Part of a platter? Along with these “fancy” bits, there were also pieces of everyday stoneware crockery.

One afternoon, we took a field trip to the vast Albany Rural Cemetery to see the grave of Dr. Thomas Elkins which was marked with an impressive marble obelisk.He lived from 1819 to 1900 and Paul Stewart said he likes to think that he was hopeful at the end; the terrible Civil War made slavery against the law at last.

On the fifth and final day of the dig, we set up basins and colanders, and cleaned the leftovers of life with toothbrushes. It was a muddy business. The volunteers were presented with humorous certificates and with bon ami and sore muscles, we departed Albany, having glimpsed a time, not that long ago, when one’s entire work and life status depended on one’s skin color. Only goodwill by well-intentioned strangers and later by the violence of the Civil War did this country vanquish the cruelty and greed that was institutionalized slavery.

For more reading on the Underground Railroad, see: Bound for Canaan by Fergus Bordewich and Bury the Chains by Adam Hochschild.

And be sure to visit the Underground Railroad Education Center at 194 Livingston Avenue, Albany, NY.