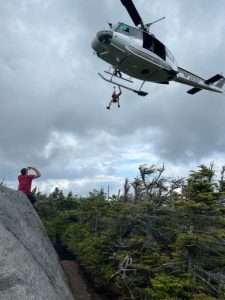 On Aug. 25 at 11:15 a.m., New York State Forest Ranger Lewis responded to a call for an injured hiker near the summit of Little Haystack Mountain, a 4,692 sub peak of Mount Haystack, which stands just 269 feet taller.

The peaks are located in the Town Keene, Essex County. Little Haystack is part of the Marcy Group in the Adirondack High Peaks.

The 65-year-old man from Slingerlands reported having a torn left quadricep and sprained right ankle.  He was accompanied by three other hikers who tried to help keep him going, but were unsuccessful.

A New York State Police helicopter was called for a hoist rescue. Ranger Lewis was inserted to the location, at around 4,600 feet, and harnessed the injured subject. 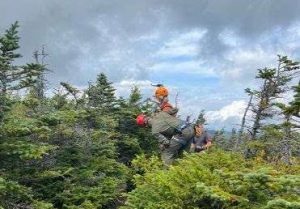 Ranger Praczkajlo hoisted the subject and Ranger Lewis to the hovering helicopter.

The hiker was flown to Adirondack Medical Center at 1:55 p.m.

Each week this New York Almanack reports on missions carried out by NYS Forest Rangers. You can read them all here.