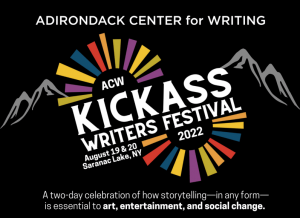 The Tri-Lakes region of the Adirondacks will celebrate writers, readers, and storytellers of all ages in two concurrent festivals on August 19th and 20th in the neighboring communities of Lake Placid and Saranac Lake.

On August 19th and 20th, the Adirondack Center for Writing will present the first annual Kickass Writers Festival in locations all over Saranac Lake. Sponsored by over a dozen local organizations and businesses, this festival will include readings, workshops, talks, publishing programs, special performances, a book fair, attendee speed dating, and more. Featured speakers include Pulitzer-prize winning playwright/novelist Ayad Akhtar, and Silvia Vasquez-Lavado, the first openly gay woman to climb the world’s seven highest summits, whose story is being turned into a film staring Selena Gomez.

The Kickass Writers Festival will kick-off Friday at Pendragon Theater with the 2021 New York State Poet, Willie Perdomo. He is expected to be introduced by former New York State Writer Russell Banks along with the award-winning poet Chase Twitchell. This program is a partnership with the NY State Writers Institute in Albany and is free and open to the public.

On Saturday, August 20th, John Brown Lives! and numerous community partners will host the first Adirondack Family Book Festival at the John Brown Farm State Historic Site in Lake Placid. Among the dozen invited authors and artists are several Newbery and Caldecott honorees and New York Times bestsellers who will meet their fans, read aloud, and talk about their work.

Saturday’s events include an author bookfair at the SL Free Library from 11 am to 4 pm, and a keynote talk at 4:30 pm, at BluSeed Studios, by author, mountaineer, and social entrepreneur, Silvia Vasquez-Lavado whose debut memoir, In The Shadow of the Mountain tells her story of being the first climbing the world’s 7 highest peaks in her quest to overcome childhood sexual abuse and addiction. The book is being turned into a film starring Selena Gomez. The festival will conclude with the popular Howl Story Slam, held at the Waterhole at 7:30 pm, hosted by LA-based comedia, Greg Barris. Tickets are $25.

The daylong Adirondack Family Book Festival will be held outdoors, under tents and open skies, at the John Brown Farm from 10 am to 4 pm, and is free and open to all.

Adirondack authors Kate Messnew, Maxwell Eaton, Amy Guglielmo, and Benjamin Giroux will be joined by, among others, Kekla Magoon, whose YA nonfiction book Revolution in Our Time about the Black Panther Party was a 2021 National Book Award finalist; Jason Chin, winner of the 2022 Caldecott Medal for his illustrations in Watercress by Andrea Wang; Rajani Larocca, whose Red, White, and Whole for middle-grade readers was the winner of the runner-up Newbery Honor; and Lina Sue Park is the author of many books for young readers, including the 2002 Newbery Medal winner A Single Shard and the NY Times bestseller A Long Walk to Water. For A full list of authors and illustrators click here.

For more information visit the Adirondack Center for Writing website.