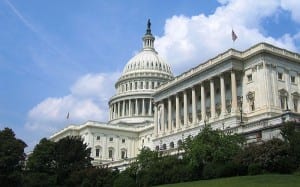 Adirondack conservation advocates the Adirondack Council today celebrated the U.S. Senate’s approval of landmark climate legislation, applauding a bill that invests hundreds of billions of dollars into programs designed to speed the nation’s transition away from fossil fuels and toward cleaner energy sources.

The Inflation Reduction Act of 2022 will also reduce the fossil fuel-fired emissions that cause acid rain and smog, while increasing employment and boosting domestic manufacturing.  The bill is expected to pass the House of Representatives later this week and be signed into law by President Joe Biden.

“This is a milestone in the protection of the waters, forests and communities of the Adirondack Park,” said Adirondack Council Executive Director William C. Janeway.  “The bill isn’t perfect, but it is far better than anything Congress has done to date to combat climate change and build a more sustainable future for our children and grandchildren.”

To curb greenhouse gases and create more green energy, the bill provides a series of financial incentives to speed the creation of new clean energy sources. It encourages the use of electric vehicles, reducing fuel use in homes and methane emissions, and increasing domestic manufacturing of clean energy devices such as solar panels, wind turbines and batteries.  The bill includes new grants and investments to low-income communities and provides incentives for the conservation of farms and forests, as well as restoration of coastal habitats.

The bill provides billions of dollars in tax credits over 10 years for companies that build new sources of emissions-free electricity, such as wind turbines, solar panels, battery storage, geothermal plants or advanced nuclear reactors. Previously, Congress had offered short-term credits for wind and solar that expired after a year or two. The credits in the new bill last for at least a decade, giving companies more certainty.

The bill also expands a controversial tax credit for companies that capture and bury carbon dioxide from natural gas-fired smokestacks, before the CO2 escapes into the atmosphere and heats the planet.  The technology is rarely used today because of high costs and uncertain outcomes. It would also provide tax breaks to keep existing nuclear plants running. It would also provide grants and tax credits for states and electric utilities to reduce carbon dioxide emissions. Reducing carbon is likely to reduce acid rain and smog too.

The bill invests $20 billion in programs designed to reduce emissions from cows and other livestock, as well as from agricultural soils and rice production.  It also funds grants to support forest conservation, the development of fire-resilient forests and increased urban tree planting, along with the conservation and restoration of coastal habitats.

The bill extends a consumer tax credit of up to $7,500 for the purchase of new electric vehicles. It offers for the first time a credit of $4,000 for used electric vehicles.  Only people who make $150,000 a year or less (or $300,000 for joint filers) would be eligible for the new car credit, and those who earn a maximum of $75,000 (or $150,000 for joint filers) for used cars. The program would run through 2032. The credits would be available for new cars priced up to $55,000 and new pickup trucks, SUVs, and vans priced up to $80,000. The bill sets aside $1 billion for zero-emissions school buses, heavy duty trucks, public transit buses and other commercial vehicles.

The bill invests $9 billion in rebates for Americans buying and retrofitting their homes with energy efficient appliances. It contains 10 years of consumer tax credits that drop the cost of heat pumps, rooftop solar, water heaters and electric heating, ventilation and air conditioning.

The bill provides $60 billion in incentives to build for clean energy manufacturing in the U.S., including $30 billion in production tax credits for solar panels, wind turbines, batteries and critical minerals processing.  Another $10 billion is planned for investment tax credits to build manufacturing facilities that make electric vehicles and renewable energy technologies to take back some of the manufacturing capacity U.S. companies have shifted to China in recent decades.  The bill would invest $500 million through the Defense Production Act for heat pumps and critical minerals processing.  It would devote $27 billion to a “green bank” aimed at funding clean energy projects, particularly in disadvantaged communities that have hosted dirty energy production.

Cracking down on methane

The bill would impose a fee on methane leaking from oil and gas wells, pipelines and other infrastructure. Methane is a particularly powerful greenhouse gas: While it dissipates more quickly than carbon dioxide, it is many times more potent when it comes to heating the atmosphere.

The bill would invest over $60 billion to support low-income communities that are disproportionately burdened by the environmental and public health effects of climate change. This includes grants for zero-emissions technology and vehicles, as well as grants to mitigate the negative effects of too-close highways, bus depots and other transportation facilities, along with construction projects located near disadvantaged communities.

“Approval of this bill brings with it a lot of great momentum toward meeting our national climate goals,” Janeway said.  He also noted that many conservationists were disappointed with parts of the bill as well. He said parts of the bill that appear to continue practices that are incongruous with sustainable clean energy and environmental justice.  Janeway said the Council agreed with Harlem’s We Act for Environmental Justice which said:

“While we acknowledge the strides made, we are concerned, along with our movement allies, about provisions for offshore drilling, carbon capture, nuclear, hydrogen, and logging on public lands. These line items continue practices that are not aligned with centering overburdened communities in decision-making or transitioning away from fossil fuels. These credits can be more effectively invested in renewable energy generation and other programs that ensure an energy transition that protects people and addresses climate change.”