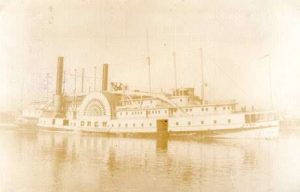 This article was originally published in Leslie’s Illustrated Newspaper on September 21, 1878.

I was awfully glad when a friend proposed a trip to Saratoga. I had been awfully jolly in New York, but New York had gone out of town, leaving nothing but its streets and its tram-cars behind it. In London we have such a perpetual flow of visitors — over one hundred thousand daily — that a fellow doesn’t so much miss the “big crowd” as here, consequently when Saratoga was decided upon I felt extremely pleased indeed. I had heard much of the palatial river steamers, and expected much.

I was down at Pier 41 [at the foot of Canal Street] at an early hour, and found the whole place occupied by one boat. Such a boat! white as the driven snow, and larger than many an English village. The people kept going into her until I imagined some game was up, and that they were stepping out at the other side. No such thing; there was room for all ay, and more.

It was something immense to see the men getting into line for the ticket-office, with as much precision as if they were on parade. No hurry, no crush, the regular “first come, first served” business, not as with us, when the biggest man comes to the front, and muscular Christianity tops over everything. And the luggage! Mountains of it, from enormous nickel-bound boxes, fit to carry Cleopatra’s Needle, to dainty hand-bags, such as Queen Victoria’s take with them when rushing at sixty miles an hour “Upon Her Majesty’s Service.’

It was awfully amusing to see this mountain gradually dissolving, as truck after truck bore its load within the recesses of the palpitating [steamer] Drew. For the first time I made acquaintance with a Saratoga trunk [a large traveling trunk, usually with a rounded top], and from what I see of it, it seems a first class invention — for another man’s wife. Near the gangway stood a handsome, gentleman-like man, whose semi-naval uniform looked as though cut by [the tailor and draper] Smallpage, of Regent Street. This, I was informed, was Captain [Stephen R.] Roe, one of the most courteous and best-respected captains of the sea-like rivers of America. I was instructed by my friend to take a state-room — at home I would have asked for a berth — and, having paid my money, became entrusted with the key of a charming little bedroom, better fitted up than that of my club, and boasting an electric bell.

As I turned out of my newly acquired apartment I was much struck by a very stylishly attired young lady, gotten up to the pitch of traveling perfection, and as new as Lord Beaconsfield’s [recently awarded Order of the] Garter. The man with her was also as if recently turned off a lathe. He carried a couple of hand-bags that had never seen rain or shine before. He hung lovingly around the lady, bending over to her, whispering into her ear, touching her hand, or her dress, or her parasol. “By Jove!” thought I, “this is a brand-new bride and bridegroom, and what a doosid [devilish; confounded; damned] queer place to select for the [honey]moon.” Mentioning this to Captain Roe, with a smile, he ordered a portly colored stewardess to open a door tight opposite to where I stood. “This,” he said, “is the bridal chamber — we have two on board. As the pink one happens to be occupied, I can show you the blue.”

Availing myself of the captain’s kindness, I entered the [room], which is a symphony in blue and white, with a ceiling resembling a wedding-cake. It is sixteen feet long, twelve broad, and nine feet high, and piquante as a boudoirette in Le Petit Trianon [a chateau at the Palace of Versailles which served as a retreat for Marie Antoinette]. The walls are white, supported by fluted pillars with gilt capitals; the cornices of gold, and in each corner stands a statuette of Cupid. The ceiling is a perfect [em]broidery of white and pink and gold, frozen lace-work, ornamented with medallions representing appropriate scenes in mythological history. Wreaths of orange blossoms entwined with forget-me-nots decorate it, within which are amorous love-birds, while in the center of the ceiling, in relief, a pair of turtle doves bill and coo upon a perch composed of hymeneal torches, and the new spent arrows of the rosy god [Cupid].

The chamber is lighted by two windows, hung with blue satin curtains trimmed with gold fringe, the inner curtain being of lace. A mirror, whose gilt frame is composed of Cupids and orange-blossoms, extends from floor to ceiling; an inlaid table upon which is placed a richly chased tray, with ice pitcher and goblets, an easy-chair a caressing lounge, a rosewood toilet-stand fitted n blue, and the bed, constitute the furniture of this fairy-like apartment. Such a bed! rosewood, gilt to the carpet, with a blue satin spread covered with real lace, pillows to match, and a rug as soft as the tenderest sigh ever breathed by love-stricken swain. The president of the company, too, is the happy possessor of a special room fitted up in the extremity of good taste. 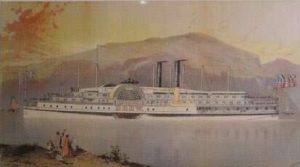 A gong sounded for dinner, and, following a strong lead, as we do at whist, I found myself in a large, brilliantly-lighted apartment, set with several tables. The menu was extensive enough to meet the requirements of the most exacting appetite, while the viands bore witness to skillful cookery. After dinner I went for a stroll, yea, a veritable stroll — always striking against the bride and bridegroom — in a saloon picked out in white and gold, the chandeliers burning gas, and the motion being so imperceptible that the glass drops did not even waggle — on a carpet fit for Buckingham Palace, and in a grove of sumptuous furniture; then forward, where many gentlemen in straw hats were engaged in discussing the chances of General [Ulysses S.] Grant for something or other, I know not what [Grant was considered a candidate for a third term as President in the coming 1880 election]; then aft, where many ladies sat in picturesque traveling attitudes, gazing at the soft outlines of the shore on either hand, some alone and some doing the next best thing to flirting.

What a sleep I had! No more motion than if I was at the club. No noise, no confounded fume of train-oil and its rancid confrères. I slept like a humming-bird, and next morning found myself at Albany. This place is on a hill, surmounted by a white marble building, and Capitol, which, when competed, will be an awfully imposing affair. I took the train for Saratoga — a drawing-room car — and such a boudoirette on wheels! — I felt as if I was in a club-window all the time.

Saratoga is awfully jolly. It is the best thing I have seen, with its main street as wide as the Boulevard Malesherbes or Haussman [in Paris], and lined for a mile and a half with magnificent elms, which shade hotels as big as some European towns. It is always thronged with carriages just like Rotten Row [an upper-class riding ground in London’s Hyde Park] in the season, and lots of people on horseback. The piazzas of the hotels are crowded with stunningly pretty girls, dressed, all over the place. Overhead is an Italian sky, blue as sapphire, and a golden tropical light falls around, picking out the shadows in dazzling contrast.

“I guess,” as the Americans say, I’ll drive my stakes pretty deep here.