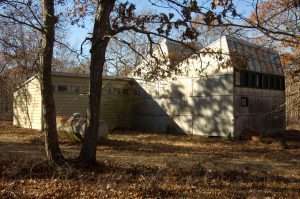 The Brooks-Park Home & Studios in East Hampton on Long Island is an important physical link to the Abstract Expressionist Art movement and the artists who made it their home.

Artists James Brooks and Charlotte Park were at the forefront of the Abstract Expressionist art movement of the 1940s and 50s. James Brooks in particular is especially is well known for painting the largest site-specific Works Progress Administration (WPA) wall mural, in the landmarked interior of the Marine Terminal at New York’s La Guardia Airport.

Their home and studios in East Hampton are part of a constellation of live-work spaces including the Pollock-Krasner House and Study Center, Elaine de Kooning House, Madoo Conservancy, and the Victor D’Amico Art Barge. The four buildings that anchor this 11-acre site include James Brooks’s studio, a mid-century vernacular structure designed and built by the artist; Charlotte Park’s studio, which was reportedly the original Wainscott Post Office; and the couple’s residence and guest cottage, which had been moved via barge from Montauk after their studios were damaged in a hurricane.

The buildings have been vacant since Charlotte Park’s death in 2010. Despite being purchased by the Town of East Hampton in 2013 with Community Preservation Funds (CPF), the site has remained vacant, with little done to protect or stabilize the buildings. The Town opened bids for demolition, which remained active until grassroots advocates learned of the site’s plight in 2019.

Since then, the group that is now organized as the Brooks-Park Arts and Nature Center has worked tirelessly to raise public awareness. Over-development is a major issue on Long Island, and the preservation of this site provides a chance to not only save a vital part of local history connected to a groundbreaking American art movement, but also a pristine natural landscape.

The Preservation League of New York State has included the Brooks-Park Home & Studios in East Hampton on the 2022-2023 Seven to Save list. The list highlights New York’s most endangered historic sites and the League offers listed places wider visibility, assistance with advocacy, and technical services.

This listing follows close behind the inclusion of Brooks-Park on the National Trust for Historic Preservation’s 11 Most Endangered List, underscoring the truly national importance of this site.