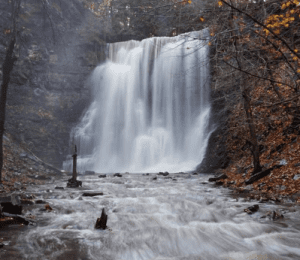 Schenectadians’ interest in protecting and exploring wilderness has its roots in the mid 1800s with industrialization and westward expansion. The wilderness was at risk of disappearing, and influential nature lovers used their writings to convince Americans that preserving land and wildlife was vital. Many Americans, including people in Schenectady, could easily see the case for this.
As cities became more crowded, citizens began to look for peaceful retreats. Outdoor recreation and the conservation movement came together as Americans took up camping, hiking, and other activities as a way to escape crowded cities. One of the earliest significant American writings of the value of the wilderness is “Wild northern scenes”, written by Samuel Hammond, a lawyer from Albany. His sentiments were shared by his neighbors in Schenectady, like Franklin Hough, the first chief of the US Forest Service, and Charles Steinmetz, the noted General Electric scientist.

Steinmetz, a proponent of getting outdoors, created the Parks Department for Schenectady, and was instrumental in developing Schenectady’s Central Park in 1912. Over the ensuing years, the community created several other local natural areas for citizens to enjoy nature. Ranging from the tiny Amy LeMaire Woods to the expansive Featherstonhaugh State Forest and the Plotter Kill Preserve, most are within ten miles of downtown Schenectady. Through all seasons of the year, Schenectady residents can escape the congested atmosphere of the city, and instead stroll through forested hills, ford cascading streams, and enjoy the peace of walking in nature.

Beyond Schenectady: The Adirondacks

For some Schenectadians, local green spaces didn’t fully satisfy the need for wild. This especially held true for young engineers, moving into Schenectady in the 1930s to fill jobs at General Electric. Many of GE’s young employees lived at the YMCA and the YWCA, which, in addition to providing living quarters, had programs to serve the needs of active young men and women. The charismatic head of the YMCA’s programming was Fay Loope, a man devoted deeply to the protection of New York’s wild lands. With a corps of young people eager to adventure north with him, Loope began leading members of the Ot-Yo-Kwa (the first co-ed outdoors group of its kind) on camping and hiking trips in the Adirondacks.

As Schenectadians’ interest in exploring the Adirondacks grew, it caught the attention of Mr. and Mrs. Arthur Venn, the owners of 35 Adirondack acres, located in the Boquet River valley. The property was ideal for outdoor activities; situated on the property was the base of a ridge leading to the summits of two Adirondack high peaks. In 1939, the Venns donated the property – which included a farmhouse – to the Schenectady YMCA with the understanding that the Ot-Yo-Kwa outings group would take charge of maintenance and financial responsibility. Named Bouquet River Lodge, the Ot-Yo-Kwa remodeled the house into a year-round base camp for weekend adventures in the Adirondacks With the Bouquet River Lodge came increased interest among Schenectadians for more adventures in the Adirondacks.

Though the Adirondack Mountain Club – the premier outing society in New York State – had existed since 1922, few Schenectadians were members of the ADK, and a local Schenectady chapter was non-existent. Schenectadians, excited by the possibilities of the Bouquet River Lodge, and attuned to the ADK’s mission of outings and conservation, resolved to found an ADK chapter based in Schenectady. In April, 1943, ADK granted a charter for a Schenectady chapter, to be called the Bouquet River Lodge Chapter and based in Schenectady. By the end of the year, membership had grown to fifty people. Together with the Ot-Yo-Kwa club and the Ys, the new ADK chapter created a community of outdoor adventurers ready to head north, explore, and protect the wild.

The first meeting of the new chapter was held at the YMCA in May, 1943, and by the end of the year, chapter membership had grown to nearly fifty people, including the Schenectady Mayor Mills Ten Eyck, and the president of Union College, Dixon Ryan Fox. One of the chapter’s more interesting (and elderly) members was John Apperson, who boasted a sterling reputation for his efforts in preserving Lake George and as an ardent defender of a “forever wild” Forest Preserve. Unsurprisingly, many members were affiliated with GE.

After all, the roots of outdoor clubs in Schenectady came from GE’s young, active employees. Ruth Tallmadge (Riford) was a published poet, including a work, “I Belong to the Mountains,” which received an Editor’s Choice Award from the National Library of Poetry. P. Schuyler Miller, a technical writer at GE and ultra-popular science fiction writer served as chapter co-chair (and president of the Schenectady County Historical Society). Rudy Dehn, the chapter’s first chair, helped develop the microwave oven.

Today, Rudy is still an active member of the Schenectady ADK and fondly recalls memories of the Bouquet River Lodge he shared with other early members of the ADK Schenectady chapter. During the Second World War, gas was rationed, but the group still managed to make the long trip up to the rustic two-story building. Says Rudy, ““We worked six days a week but on Saturday night, we left as early as we could get away, get on the bus, get up there somewhere around 11 o’clock at night,” recalls Rudy Dehn. “Beat our brains out all day Sunday and then 4 o’clock we’d have to get the bus back home again.”

Cold temperatures didn’t deter Schenectadians from venturing north to stay at the lodge, though early arrivals were rewarded. “We had two bunkrooms upstairs – one for the men and one for the women,” says Jeanne Place. “The women’s bunkroom was in the front and the fireplace was in the front. So the sooner you got there, the more likely you were – in the wintertime especially – to get a bunk that was right close to the fireplace or the chimney.”

Though the Schenectady Chapter’s founding members are no longer climbing High Peaks, and the Boquet River Lodge is out of commission, many founding members are still active in the outdoors and with the club, supporting the organization they helped create so many decades ago. Today, the membership has grown to over 900 people.

The 46ers and Schenectady 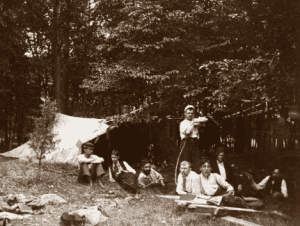 Notable among outdoor enthusiasts in Schenectady is the 46er challenge – climbing the 46 Adirondack high peaks that have elevations of 4,000 feet or higher.

Schenectadians were instrumental in founding the ADK46ers club, which tracks climbers who have completed the challenge. For a number of years, the club’s headquarters was based in Schenectady.

Though the total number of 46ers increases each year, what stands out is how many early 46ers hailed from Schenectady. Although climbing all of the “46” in any season is a major accomplishment, special recognition is given to those who climb them in the winter, when deep snows, frigid temperatures and short daylight make climbing even more difficult.

Schenectady is well-represented among the elite Winter 46ers. The first four recorded Winter 46ers, who completed their winter climbs between 1962 and 1971, were all from Schenectady: Edgar B.Bean, James W. Collins, David A. Vermilyea, and Elwin Bigelow. Also among the first ten were two more Schenectadians, N. Clark Gittinger (#8) and Richard Chrenko (#9), and, in 1973, Elsie Chrenko of Schenectady became the first woman to complete the “46” during the winter.

Although many Schenectadians have worked hard over the years fighting for conservation of wilderness, one man in particular stands out for making a remarkable impact in the Adirondacks and here at home in Schenectady. Paul Schaefer, a Rotterdam native, devoted his life to conservation. In 1945, Schaefer led the fight against a series of proposed dams in the Adirondack Park.

Later known as the Black River Wars, Schaefer’s campaign was one of the largest and most successful grass roots environmental operations in U.S. history. Following this success, Schaefer continued on to lead New York’s environmental movement for another half century. He was particularly known for his conservation work surrounding the Adirondack Northway, the protection of waterways, rivers, and streams, and the establishment of preserved areas in the Schenectady area (Vroman’s Nose and the Great Flats Aquifer, to name a few).

Today, Schaefer’s extensive library of Adirondack literature is a part of Union College. The Adirondack Research Library of the Kelly Adirondack Center is located in Schaefer’s former Niskayuna home, and is home to photographs, maps, and documents that trace the conservation movement from 1870 to 1997.

Today, Schenectadians own camps throughout the Adirondacks, and, in different ways, continue to conserve and enjoy the wild. The local ADK chapter is still active, hosting some of the finest whitewater programs in NYS. Each year, multiple Schenectadians hike their way through the High Peaks, achieving 46er status. Groups work to conserve the natural lands of Schenectady, too.

The Mohawk Hudson Land Conservancy has doubled down on efforts to protect the natural, scenic, agricultural and cultural landscapes of Schenectady. ECOS: The Environmental Clearinghouse of Schenectady is active in providing environmental information and educational opportunities that enhance appreciation of the natural world. Through their work, and the work of MHLC, Schenectady is home to many natural spaces that the public can explore, perhaps in search of wonder or peace. At home, in the North County, and beyond, the legacy of Schenectadians and conservation continues.

This article was written by Norm Kuchar and Mark Vermilyea and first appeared in Schenectady County Historical Society Newsletter, Volume 63. Become a member of the Society online at schenectadyhistorical.org.

Photos, from above: Upper Falls at the Plotter Kill Reserve courtesy Michael Diana; and Charles Steinmetz camping in the Adirondacks courtesy SCHS Archives.