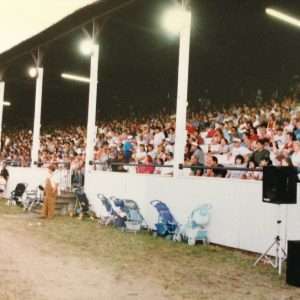 Another important issue that occurred in 2020 was discussions about the fate of the Fair’s historic grandstand, which was in very poor condition.

After much discussion, the Agricultural Society Board voted unanimously to demolish the grandstand. It had been built in 1896 at a cost of $4,000 and had a dirt floor until 1977. In that year a concrete floor was poured and petitions built to divide an area for a 4-H concession stand and other display areas. In the late 1990s the Agricultural Society’s Education Department, under the direction of Susan Leahey, was located under the grandstand. In the early 2000s, the grandstand’s front foundation wall was replaced.

During a building inspection it was discovered that the wall had collapsed in some areas and a new wall was necessary to support the grandstand and make it safe for occupancy. In 2019 it was confirmed that the grandstand was contaminated with lead paint on the siding and asbestos in the roof area and was declared to be unfit for occupancy. The Agricultural Society would have had to remove the lead and asbestos and to bring it up to code, including adding universal accessibility.  They concluded that due to the high cost to renovate the 125-year-old structure the only feasible solution was to demolish it.

Griffin Gillette, the owner of Fair vendor Polar Bear Homemade Ice Cream, was hired to demolish the grandstand. When one support wall was taken down the building collapsed upon itself. The demolition and removal were accomplished in two weeks at a cost exceeding $50,000. Several members of the Agricultural Society’s Board of Directors, along with Executive Director Susan Rhoades and a few neighbors, gathered on the fairgrounds to watch the demolition.

In November Mike Smith, Supervisor from the town of Galway was instrumental in getting approval for the Saratoga County Board of Supervisors to include a grant of $250,000 in the 2021 budget to help with the cost of replacing the grandstand. To be eligible to receive this grant, the fair had to match the grant with $250,000 from donations. The next challenge was to raise this money.

In 2020, the Agricultural Society lost several people who had been instrumental in the success of past Fairs, including Dorothy Rowland from the culinary department; Jim Coleman from the grounds crew; Richie Pine who ran the antique building shop; Tony Eastwood who was active in the conservation department; and Tim Barnes who took care of all the flower beds on the grounds; as well as others.

In April 2021 the Board of Directors voted unanimously to cancel the full six-day fair and instead hold a three-day event including, horses, cattle and other animals, some food vendors, and tractor and lawn mower pulls. Meanwhile, a fundraising program was developed with the first event held in May and by October the $250,000 needed to match the Saratoga County grant had been raised.

On a sad note, in December of 2021 the Fair community lost three more long-time Fair supporters, volunteers and workers. Marie Willard had been an employee of the fair for several years in the late 1990s and was a member of the Board from 1981 to 1995. Jeffrey W. Fitzsimmons was a volunteer at the fair for several years where he operated the wobble wheel roller for the truck and tractor pulls. Frank Griffin was a board member from 1993 to his retirement on September 30, 2021. He attended annual conferences in Las Vegas on Fair management and networked across New York State.

The Agricultural Society is looking forward to 2022. Work continues to replace the grandstand. The project started in March by adding the necessary fill to level the area to meet the level of the track.  A concrete base for the bleachers was poured in May and the bleachers were set in June. A cover for the bleachers is still in the works.

The Agricultural Society is looking forward to a return of a six-day fair July 19-24 at the fairgrounds in Ballston Spa.