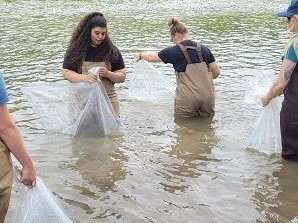 Native and colonial Americans fished for shad for sustenance, often smoking the flesh and consuming the roe as a delicacy.

The eggs and milt were collected from Potomac River fish and reared at the Van Dyke State Fish Hatchery in Pennsylvania for 30 days before making their journey up to New York. Prior to stocking, fish were marked so if they are recaptured, staff will be able to obtain useful information on fish growth, movement, and stocking success.

Stocking the shad further upstream will give them more time to grow larger, hopefully increasing their chance of survival and the success of restoring this migratory species.