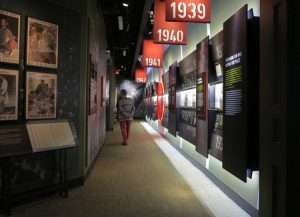 The Franklin D. Roosevelt Presidential Library and Museum is administered by the National Archives and Records Administration and is located near FDR’s home in Hyde Park, Dutchess County, NY.

The first presidential library — and the only one used by its namesake while in office — was planned and designed by Roosevelt in the Dutch Colonial style and houses his official papers, books, and other memorabilia, as well as the papers of First Lady Eleanor Roosevelt.

The library’s study was the scene of several of the president’s popular “fireside chats.” It remains as it was when FDR used it during his third and fourth terms. Museum exhibits focus on all aspects of FDR’s life, from his boyhood through his presidency, including the desk he used in the Oval Office, and his 1936 Ford Phaeton. Additional exhibits trace the life and accomplishments of Eleanor Roosevelt.