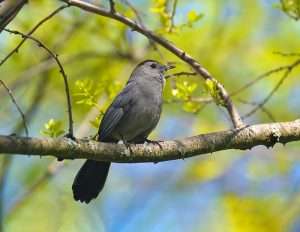 Several years ago, I was awakened nearly every day of late spring by a recurring – and very loud – bird sound. I say “sound,” rather than “song” because this particular noise was not so melodious as the cheery whistling of the robin or the musical trilling of the hermit thrush. It was more of a short squawk, repeated over and over again.

This, I discovered, was the call of a gray catbird (Dumetella carolinensis). Over the years, catbirds have returned each spring to our yard, and I have come to enjoy their sounds – and the antics of these curious and loud birds.

Our yard offers much to attract catbirds, which prefer thickets and dense shrubs for foraging and nesting. There is a copse of old lilac bushes along one edge of the driveway and an unruly stretch of rugosa rose on the other, and we see many birds of various species darting into and out of the bushes and brambles.

From my summer perch on the front porch, I’ve seen catbirds flit, both morning and evening, from the lilac bushes to the rugosa hedge, and hop through the perennial garden and along the lawn, which comprises mainly clover and other native ground cover. Sometimes a catbird will alight on one of the granite posts nearby and eye me sideways, flicking its long tail before flying off. Other times, it hides amid the foliage of the highbush cranberry and mew-squawks for a long time.

That mewing can sound quite like a cat, which is where the catbird gets its familiar name. This was that sound that first caught my ear. Other catbird calls are described as sounding like “quirt” and a chattering “chek-chek-chek.” It is the catbird’s propensity for singing, however, that I find most impressive.

Gray catbirds are members of the Mimidae family, which also includes mockingbirds and thrashers. The whole family are talented mimics. The catbird’s repertoire includes its species’ own calls and songs, impersonations of other songbirds, and even imitations of frogs and man-made noises. In 2010, Greg Budney, a former audio curator at Cornell’s Macaulay Library, recorded a catbird in California adeptly copying the sounds of more than a dozen other bird species, as well as a tree frog. 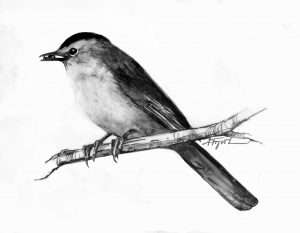 As its common name implies, the gray catbird is not the most colorful of birds, and a male’s ability to sing multiple songs may be related to its success in attracting a mate. Both males and females are gray with black caps and tails, and a rufous patch, often hidden, below their tails. Without bright feathers to flaunt, a male catbird may rely on its singing prowess instead.

Researchers speculate that a male with a broader singing repertoire is showing females that he’s been around the block – or thicket – a few times and is therefore a good choice of mate. Once he gets a female’s attention, though, he may turn away and raise his tail to show off those chestnut-colored feathers.

After a male has established a territory and attracted a mate, the pair finds a nesting site, typically within the protection of tangled vegetation, dense foliage, or briars. (The birds’ genus name – Dumetella – means “little thicket.”) The female takes charge of nest-building, piecing together a bulky cup from twigs, grasses, and leaves and lining this with softer materials such as hair and pine needles. She lays a brood of about four greenish-blue eggs, which she’ll incubate for just shy of two weeks. A mother catbird will examine her first-laid egg carefully and take notice if brown-headed cowbirds, notorious nest parasites, try to leave their eggs in the mix. The parent catbirds will puncture and remove unfamiliar eggs from the nest. Both parents feed the nestlings a diet of insects until they fledge, about 10 days after hatching.

Adult catbirds are omnivorous, consuming beetles, caterpillars, grasshoppers, spiders, and other invertebrates, as well as various fruits and berries, with cherries, elderberries, and blackberries among the favorite menu items.

Gray catbirds breed throughout the eastern and midwestern United States and winter as far south as Central America. Banding records of the species suggest that the catbirds I see in my yard likely spend winters in Florida or on a Caribbean island. Those records also indicate that catbirds often return year after year to the same breeding grounds. Perhaps, then, the mewling male bird that flits and hops about my yard this summer may be the same one who woke me up each morning several springs ago.

Meghan McCarthy McPhaul is assistant editor for Northern Woodlands. Photo of Gray Catbird courtesy Wikimedia user Hari Krishnan. The illustration for this column is by Adelaide Murphy Tyrol. The Outside Story is assigned and edited by Northern Woodlands magazine and sponsored by the Wellborn Ecology Fund of the New Hampshire Charitable Foundation.