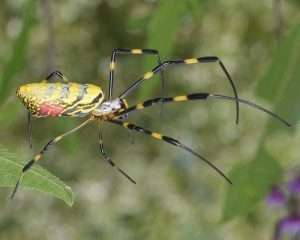 Arachnophobia, the fear of spiders, reportedly affects from three to six percent of us worldwide. In fact, it’s the most common phobia among humans (I assume the fear of humans is the most prevalent phobia among other animals, spiders included). Experts aren’t sure why we’re so scared of web-spinning arachnids, although evolutionary selection and family genetics are likely involved.
Cultural conditioning plays a role as well. In the US, for example, up to 15% of the population have some degree of arachnophobia, more than twice the global average. And a 1991 study in the UK found that 78% of Londoners surveyed expressed a general dislike of spiders.

The much-feared and potentially more dangerous brown recluse spider (Loxosceles reclusa) lives far to our south. “Snowbirds” returning north in the spring have sometimes inadvertently brought home a brown recluse in their luggage, but we are fortunate that neither the spiders nor the snowbirds can survive the winters here. But these points are unlikely to sway the opinion of the spider-phobic. Like any phobia, logic does not make a dent in one’s fear of spiders.

I would argue, however, that perhaps we should be afraid of spiders, although not because they are hairy, leggy, or venomous. For one thing, spiders are remarkably adept at causing fires.

Yellow sac spiders, common throughout North America outside the Arctic, weave dense little nests in which to lay their eggs, caching these cute tufts of silk in safe, cozy spots. The fuel vent lines in certain Mazda vehicles were apparently the Goldilocks-perfect size and shape for spiders to fill with nursery-nests. Unfortunately, this led to some gas tanks rupturing from high pressure, resulting in fires. In 2014, Mazda was forced to recall 42,000 of its vehicles to fix the problem.

A year prior to that, a guy in Seattle lost his house to fire while trying to kill spiders in his laundry room with a blowtorch. And at a Michigan gas station in 2015, a man found a spider on his gas cap, so naturally he tried to kill it with a lighter (notice you don’t hear about women doing this kind of thing). I’m not sure about the spider, but the guy wound up torching a pump island, narrowly escaping injury.

Well don’t look now, but Asian spiders the size of your palm are expected to move into northern US and southern Canada, possibly within a few years. Native to Japan, North and South Korea, Vietnam, and parts of China and India, the giant Joro spider (Trichonephila clavata) is a type of orb-weaver. Adult females are about 10 cm long including the legs, and their webs can be more than three metres wide.

They’re colorful, being largely bright yellow on their backside with alternating bluish-grey bands, and having a splash of red underneath. Their legs are banded black and yellow.

Joro spiders likely entered the US in shipping containers, showing up in 2014 in Georgia. Since then, they have been spreading at a rate of about 16 km per year. In a March 9th, 2022 article on the NBC News website, author Adam Larson (identified as a ‘science communicator’) declares the Joro could make it to Canada “in a matter of months.” I have not been able to find other evidence to support his claim, although many sources note the spiders are proving more cold-hardy than first thought.

However, a 2022 Penn State Extension bulletin states that Joro “…spiderlings are capable of moving tens to hundreds of miles via ballooning, so a storm blowing in the right direction at the right time of year may move them in large jumps. Additionally, as they increase in numbers, the risk of human-mediated transport to new areas also increases.” So maybe the assertion about an imminent invasion up north is not entirely far-fetched.

The good news is that not only are Joros very shy; their fangs are said to be too feeble to puncture human skin even if you encounter a grumpy one. Better yet, Joros eat a lot of mosquitoes and agricultural pests, more so than other types of spiders.

There is evidence they could prove invaluable as a control for brown marmorated stink bugs, an invasive pest which has devastated many crops, grapes in particular. While other predators want nothing to do with stink bugs, Joros seem to really like them. Now we just need a spider big enough to catch and eat feral swine. Wait – no we don’t.

One downside of these leggy giants is that if you’re a single guy in Japan who believes in old legends, you might accidentally date a spider who is disguised as a comely maiden, thus making your first date your last date ever. The Joro spider derives its common name from a series of ancient Japanese legends about Jorōgumo, or “entangling bride.” The premise of these tales is that after 400 years, Joros get magic powers, able to appear with a human upper body, their spider legs hidden beneath a dress. Always check the ankles before taking her out, guys.

As with any newly arrived species, the real risk is not yet known. It remains to be seen whether Joros continue to be good neighbors, or if they become the next kudzu debacle.