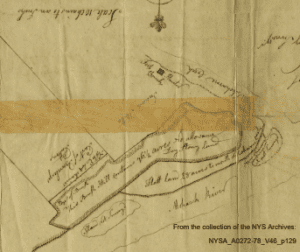 The hamlet of Fort Hunter in Montgomery County, NY, while small, has been historically significant even since before the American Revolution. It was home to people of the Mohawk Nation and was known as the Lower Castle being downstream or below Canajoharie on the Mohawk River. Being at the confluence of the Schoharie Creek and river it was always an important trade post for goods, food, and cultures.

During Queen Anne’s War (1702-1713), the Mohawks living in the valley knew they needed further protection from the French and their allies. With the help of William Johnson and Peter Schuyler a fortification and chapel was built. According to Vrooman’s novel Forts and Firesides of Mohawk County, “Possibly Peter Schuyler of Albany did more than any other white man to secure the building of the first of these posts at Fort Hunter. He appeared in London in 1710 with five of the chief sachems of the Indians. The Queen became very interested in them and directed that each of them should sit individually for his portrait…. As a result, a Fort was built at the mouth of the Schoharie Creek.” It was not until the following year that a contract was signed to build the fort in 1711.

Six Dutchman of Albany were commissioned to build the fort. The Fort was completed in 1712. While conducting research for this article I could not find what the dimensions of Fort Hunter where. An archaeological study was done by the bureau of historic sites in 1987 and in their findings, it simply states the fort was 150 feet square. This seems rather small given that the chapel was also inside the fort.

But this only adds to the unknowns about the fort. While it was called a fort, when compared to other forts, it was more of an outpost. The English occupied barricaded land, and kept abreast of the general goings on of those traveling along the Schoharie and Mohawk River. It was also the sight of Queen Anne’s Chapel, ran by the Society for the Propagation of the Gospel in Foreign Parts. A missionary group set to teach the ways of the Anglican Church in foreign areas. 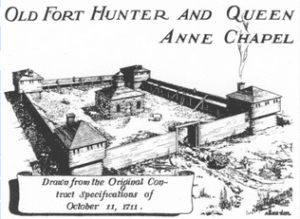 This was one of the reasons to establish the fort. To gain more control of western lands and the Indigenous People that lived in this area. The United Society Partners in the Gospel is what the missionary organization is called today.

In their archival records they have documents on their work in Fort Hunter. The title of one document says, “At the Kings Fort by the Mohawk Castle October 4th, 1717.” Given the title and date of the documents and names mentioned this is from Fort Hunter. Part of the transcription of one document states, “that we did hear two Sachims and severall Others of the Principal Indians say by William Printup another Interpreter that they did well like the way that Mr. Andrews had taken to Instruct them, and likewise his Life and Conversation among them.” While these are primary source documents whether what was written is true is unclear.

The fort continued to be occupied up until the start of the American Revolution. Just prior in 1773 an accidental fire severally damaged the fort; it was then rebuilt farther north with the chapel separate. However, by the conclusion of the war it was deconstructed again and never rebuilt. The land the chapel was on eventually sold after the American Revolution and the building served as mixed use until it was torn down to build the Erie Canal. The Parsonage is the only structure relating to the fort that remains today, it is a private residence.

While Fort Hunter was only occupied for a short time, its name remains and echoes back to the history of this area where cultures mixed, and goods were exchanged. Something only enhanced by the building of the Erie Canal.

In the post-Canal era the hamlet of Fort Hunter became a quieter mostly residential community. Schoharie Crossing was created a State Historic Site in 1966.

Illustrations, from above: map of Fort Hunter courtesy NYS Archives; and drawing of Old Fort Hunter and Queen Anne Chapel.