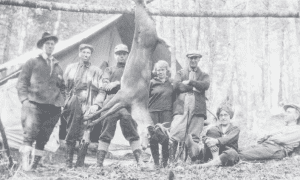 The claims of US Representative Elise Stefanik, New York State Senator Dan Stec and others that the six-million-acre Adirondack Park is among the “sensitive locations” from which all firearms would be banned under new legislation signed by Governor Kathy Hochul, while ludicrous, at least concentrates our minds on the question of what, precisely, makes the Adirondack Park a park unlike almost any other.

Comprising 2.6 million acres of Forest Preserve lands and waters and 3.4 million acres of summer resort towns, ski centers and modest camps, the Adirondack Park was created in 1892 when a cartographer employed by the New York State legislature picked up a blue pen and drew a circle around the counties where deforested lands had been seized in lieu of taxes.

According to Phil Terrie, the author of Contested Terrain: A New History of Nature and People in the Adirondacks (Syracuse Univ. Press, 2008) and whom I contacted for this article, “At some point in the 1910s or ’20s, it became obvious that New York State would never own all lands within the Blue Line. The idea of a park that was a mixture of both private and public land evolved slowly into the current reality.”

Jim Urso, a spokesman for Governor Hochul, acknowledged as much when he stated, “the Adirondack Park… is distinguished both in statute and in the state constitution from all other public parks in New York State.” Senator Dan Stec’s office dismissed Urso’s statement as an attempt to “walk back (the administration’s) blunder on what its new law means in the Adirondack Park.”

Fumed Stec, “The law reads clearly that it will be a felony to possess a firearm, rifle or shotgun in sensitive areas, including parks.”

The blustering continued: “the Governor and legislative leaders criminalized all guns being carried on park property. In doing so, the approximately 130,000 people living on the 6-million-acre Adirondack Park lands are at risk for felony charges for merely owning a shotgun or rifle. This legislation turns law-abiding gun owners in the Adirondack Park into felons.”

US Representative Elise Stefanik inserted herself into the imbroglio, stating in a press release, “Kathy Hochul and her radical Far-Left Democrat allies in Albany are shredding the Constitution as their most recent gun ban bill immediately classifies the tens of thousands of law-abiding gun owners in the Adirondack Park as felons.”

Stefanik continued, “This unconstitutional legislation states that a person is guilty of criminal possession of a firearm… when such person possesses a firearm… in or upon a sensitive location. The unconstitutional bill goes on to define a sensitive location as a public park. This is a direct attack on the law-abiding and patriotic citizens of the North Country and Adirondack Park.”

Reporters unknowingly validated the GOP’s falsehoods by identifying the Adirondack Park as “a state park,” similar in kind if not in size to the state parks that developed under the inspiration and more often the direct supervision of Robert Moses in the 20th century.

According to Jim Urso, the new law preserves the status quo in the Adirondack Park.

“The new law changes nothing for lawful gun owners on Forest Preserve and privately-owned lands within the Blue Line of the Adirondacks. These areas are not considered ‘sensitive locations’ under the law,” Urso stated Urso said the Governor’s Office is directing State Police and the Department of Environmental Conservation to issue guidance to law enforcement personnel that reflects the adequate reading of the state constitution and current law.

If disagreement exists within the Hochul administration about the meaning of the new law, the Governor should “amend the poorly-written legislation so law-abiding Adirondackers aren’t made to be felons,” Stec said.

Stec and Assemblyman Matt Simpson have taken that task upon themselves by drafting legislation to exempt Adirondack Forest Preserve lands from the restrictions on firearms.

Since the Forest Preserve was never intended to be among the “sensitive locations,” such as “libraries, public playgrounds, public parks, and zoos,” from which firearms are banned, it is not clear why such a law is necessary.

According to the historian Phil Terrie, “It’s understandable that people find the use of the word Park when referring to the Adirondacks confusing.” But while the concept of an Adirondack Park may be confusing, Terrie adds, “it’s unforgiveable when people like Ms. Stefanik invoke that confusion in a transparent effort to advance contemptible, manipulative political ambitions.”