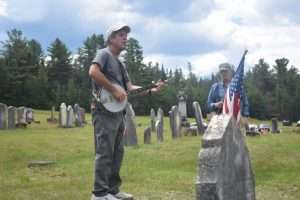 Stager didn’t know any of these people personally. They all died in the late 1800s. But in researching their lives, Stager, a Paul Smith’s College biology professor, said he’s become immensely respectful of their fights for freedom for all Americans, on the battlefield, or at home.

He had just traveled 5,000 miles to learn about their lives and brought symbolic handfuls of earth from the south to lay at their gravesides on Monday.

Stager told the two dozen people gathered in the cemetery to look away if they didn’t want to see a grown man cry as he placed sandy dirt, from a Maryland plantation, on the grave of a man who fled there to find freedom in Vermontville. He brought with him soil from a soldier’s grave in New Orleans, which he sprinkled over the grave of a woman buried in Union Cemetery — reuniting a mother and son in death. 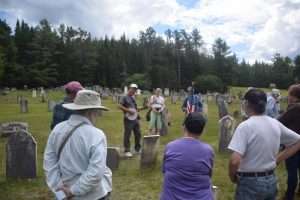 Stager shed tears when he emptied dirt from a Florida battlefield over the nearby grave of a “hero” who fought there. He and his wife, Kary Johnson, returned from a 5,000-mile road trip to see civil rights, Civil War and slavery landmarks around the South last week.

“It was mind-boggling and heart-wrenching and inspiring,” Stager said.

They visited sites where the Black Adirondackers buried in Union Cemetery lived, fought or were enslaved. He said he connected with their stories and learned how their stories connect to today. 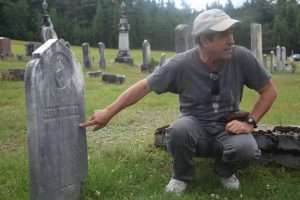 Stager said Monday’s gathering was “totally impromptu.” They returned from their road trip earlier than planned and he figured the Fourth of July was a good time to recognize a piece of American history right here in Vermontville.

When these people were alive, people in this country were seriously debating whether enslaving them was good or bad. That’s how different it was back then, Stager said. But he added that the roots of racial issues today can be traced back to those days.

Stager said that in the 1800s, “monied interests” in New York — people who made lots of money off of slavery — were invested in suppressing the Black vote and maintaining slavery in slave states. New York officially abolished slavery on July 4, 1827, but the state implemented a law requiring Black men to own $250 in property to have the right to vote here. To skirt this exclusionary law, abolitionist Gerrit Smith granted hundreds plots of land in the area to Black men around the state in the 1840s, securing them the right to vote.

In all, Stager said Smith gave away over 100,000 acres to 3,000 Black New Yorkers. In recent months, Stager has been mapping all 3,000 lots, learning about the people who owned them and digging up their life stories. 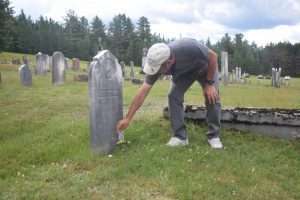 “Half of Franklin, North Elba, St. Armand and Bellmont were Black-owned,” Stager said. But their stories are not well known. Stager said a book centralizing this information doesn’t exist … yet. He said this aspect of Adirondack history is just starting to be rediscovered now.

Stager pointed out that John Thomas’s gravestone lists the Maryland county he was born in, which is uncommon for a gravestone. “He was announcing publicly to the world, ‘I escaped from those people,’” Stager said.

Thomas escaped slavery in Massachusetts and became a Smith grantee in Vermontville. He was one of a few Smith grantees who had formerly been enslaved.

Stager said on his road trip, he found the Thomas plantation — he called it a “forced labor camp” — in Barclay, Maryland. He pointed out that John had the Thomas name forced on him. “I brought some earth from John’s grave, and I flung it there and said, ‘This is all of John Thomas you’re ever going to get,’” Stager said.  He also brought some soil from Maryland and dumped it at John’s gravestone.

Thomas was given some land near Plumadore Pond. He left and returned to buy some land himself on Muzzy Road, where he raised a family and farmed the land. The land there is still being farmed.

Thomas was hunted for obtaining his freedom. The Thomas family of slavers in Massachusetts sent bounty hunters — slave catchers — to Vermontville to capture John Thomas. But Stager said Thomas was so well-liked, the community here drove them away.

Glenn McClure, another professor at Paul Smith’s College, pointed out that while slavery wasn’t legal in the North, bounty hunting of Black people had been codified in federal law and allowed anyone to legally kidnap any Black person and turn them in to slavers.

John Thomas was born in 1810 and died in 1894.  McClure has written a folk opera about Thomas’s life called “Promised Land.” Performance of this opera has been on hold because of the pandemic, but he said he hopes to find a way to get it to the stage soon.

Louisa and James Brady weren’t Smith grantees, Stager said; they moved here on their own.

While living here, James signed up to fight in the Civil War, serving in the 118th New York Infantry Regiment, also known as the “Adirondack Regiment.” This was a multiracial regiment. James saw service through the whole war, Stager said.

The Bradys’ son, Samuel, joined the army when he was old enough. Stager said Samuel wanted to be in his father’s regiment, but at the last minute, the military put him in another regiment. Stager thought about Louisa at home here, worried about her husband and son fighting in a war for their freedoms. Samuel died in New Orleans, probably of disease. James survived.

Morehouse’s family were Smith grantees. He lived with his mother at Paul Smith’s Hotel in the 1860s and likely knew Paul Smith personally, Stager said.

Morehouse joined the 54th Massachusetts Regiment, shortly after the Black regiment had suffered major losses in brutal battles. This was heroic in itself, Stager said. Morehouse saw hard combat in the South and was singled out twice in the official record of the 54th for his bravery as a sharp-shooter and scout.

There was more danger in the war for Black soldiers. The Confederate army had said any injured African-American soldiers found on the field would be executed or enslaved.

Black soldiers were also given half the pay of white soldiers. Morehouse’s regiment refused pay altogether to protest this.

The Union had attempted to move across Florida and suffered massive losses in the Battle of Olustee. Morehouse’s regiment dropped their supplies and ran miles toward gun and cannon fire to hold off the Confederates and allow others to retreat.

They spent days without sleep or food, but when they returned to camp, they were told they had to go back out. A train bringing wounded back had broken down, and they were vulnerable to the Confederates.

Morehouse and his regiment ran back to the train. They tied ropes to the train and pulled it three miles until they were supplied with horses. Then, with human and horse power, they pulled the train another 7 miles back to camp. This took two days.

Stager said they saved the lives of all those injured soldiers.

Morehouse returned after the war and bought land somewhere on Swinyer Road.

Stager brought some dirt from the Olustee battlefield for Morehouse. He said visiting the battlefield on his trip was sad. The only information at the historic field was written by the United Daughters of the Confederacy, a racist organization set up after the Confederate loss in the war.

Stager said instead of the mythological tales this organization spins about its soldiers, he wishes people learned about the true heroics of people like Morehouse.

Stager said there is a lot of misinformation and lost stories about these Black Adirondackers. He referred to author Alfred Donaldson as a “pseudo-historian” whose accounts of the Black families who moved here to farm and raise families are inaccurate or incomplete.  “He says that they were lazy, incompetent, that it was a failed colony, all these terrible things,” Stager said.

Gerrit Smith and John Brown’s dream was to create a multi-racial community in the Adirondacks to be a model for America. It didn’t work out exactly as planned. The land was not good for farming. Over time, these families let the land revert back to taxes and many plots became the state land that surrounds the area today. But Stager said several dozen Black families moved here to the properties they owned, and some chose to stay and make the land profitable.

While Donaldson has a High Peak named after him, Stager said he doesn’t know of any land form named after the Black people whose stories he misrepresented, save for two — “N-word Hill” and “N-word Brook.” He wants to get these places renamed after the Black families whose legacies he said are ignored by these racist names. “It’s up to us to keep their story alive,” Susan Goff said.

At the end of the gathering, Stager led the group in a rendition of the Union Army marching song “John Brown’s Body.” Plucking at a banjo and with a chorus of voices behind him, Stager, said Morehouse likely marched to this song. The song ended with the refrain “His truth is marching on.”