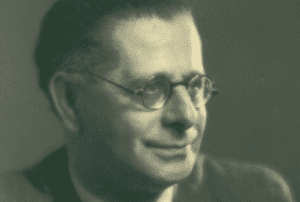 One of the top-grossing American films of 1940 was the western Santa Fe Trail, the seventh Errol Flynn and Olivia de Havilland collaboration. The story concerns John Brown’s campaign against slavery just before the outbreak of the Civil War. Starting out on an acting career, young Ronald Reagan appeared in the story line as George Armstrong Custer. 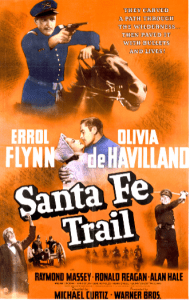 Although not used in the movie, the song “Along the Santa Fe Trail” was composed by Wilhelm Grosz, a refugee from Austria. This, the final composition of a talented musician, highlights the suffering that many Jewish artists experienced during the Nazi reign of terror.

Composer and pianist Wilhelm Grosz was born on August 11th, 1894 in Vienna. A gifted youngster, he received a solid musical education at the Vienna State Academy where he attended classes by opera composer Franz Schreker. At the same time he studied piano with Richard Robert, one of the outstanding Austrian teachers of his era.

In 1921, following his doctorate graduation for which Grosz wrote a dissertation on Wolfgang Amadeus Mozart, he was appointed conductor of the Mannheim National Theatre. Grosz seemed destined for an illustrious career. Some critics labelled him the likely “successor” of the revered Gustav Mahler. So far, so conventional.

By 1927, Grosz had moved to Berlin where he was appointed artistic director of the Deutsche Ultraphon gramophone company (founded in 1925; later known as Telefunken). The city’s thriving cabaret and jazz scene offered plenty of scope for those with an interest in experimental music. Swinging Berlin radicalized the musician’s outlook and interests. 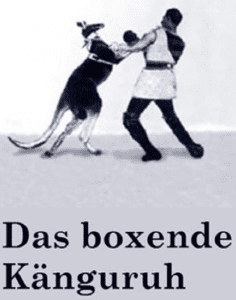 At the time of his arrival, Berlin had emerged as a center of filmmaking. Its history reached back to the beginnings of moving pictures. In 1895 Das boxende Känguruh was shown at the famous Wintergarten theater, an event considered the first commercial screening in the history of the medium. During the 1920s the city became a hub for producers such as Fritz Lang, Ernst Lubitsch, and Friedrich Wilhelm Murnau. Many of their screen classics have lasted over time and lost none of their original effect. Joseph von Sternberg’s Der blaue Engel (1930) launched Marlene Dietrich on the road to super stardom.

During the late Weimar period, Berlin’s cabaret and “Tingeltangel” clubs cultivated an atmosphere of (political and/or sexual) scandal and decadence. With an audience consisting of toffs, well-connected ladies, prostitutes, and criminals, the nightclub was a place where middle-class citizens liked to release themselves (temporarily) of the shackles of respectability. 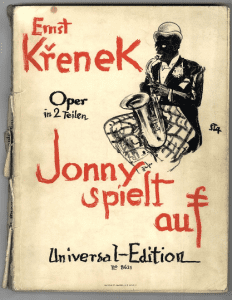 The city equated cultural expression with hedonism. Open to the influx of new styles of music and dance, Berlin embraced jazz. Paul Hindemith and Kurt Weill were enthusiasts; Ernst Krenek incorporated jazz into his 1927 opera Jonny spielt auf (Jonny Strikes Up). Wilhelm Grosz too embraced the avant-garde excitement and his creative approach showed parallels with Kurt Weill’s aesthetic principles. In 1927 he composed a jazz ballet Baby in der Bar which features a tango, foxtrot, and at its climax a shimmy. 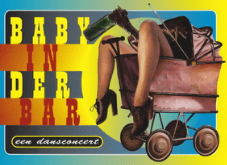 The German-language Radio Breslau was launched in May 1924. Between 1929 and 1933, the station flourished under the leadership of the poet and author Friedrich (Fritz) Walter Bischoff. The Nazis would eventually remove him from his post, but for many listeners he left a legacy of vibrant aesthetic innovation through his experiments with sound recording. 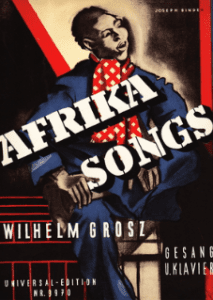 In 1929, the Radio Breslau commissioned Wilhelm Grosz to compose a cycle of “African” songs. In preparation to this challenge, the latter familiarized himself with the African-American poetry of the Harlem Renaissance. He showed particular interest in the work of Langston Hughes who, in 1925, had published his first poetry collection titled The Weary Blues. Although not designed to be set to music, these verses were infused with references to song and dance.

All in German translation, Grosz set to music five poems by Langston Hughes, one by Jean Toomer (who was known for his 1923 novel Cane), and a lament by Frank Smith Horne (an influential figure in the Harlem Renaissance), and scored them with a plonking banjo and jazzy piano part. The blues-flavored cycle “Africa-Singt” (Africa Songs) for baritone, mezzo soprano and chamber ensemble premiered in 1930 and was received with curiosity.

Under fast changing political conditions, this musical interest soon faded. Once the Nazis took control of cultural life, the arts were placed under censorial control. Third Reich authorities decreed that inferior or “degenerate” art was to be eliminated. Strict regulation and zealous intolerance culminated in two Goebbels-inspired exhibitions that were held in Düsseldorf: Entartete Kunst (1937) and Entartete Musik (1938). These “punishment” shows were intended to name and shame degenerate (Jewish and modernist) artists who undermined the Nazi fabrication of German culture.

Wilhelm Grosz’s career was cut short. Having been forced to leave Berlin in 1933, he briefly acted as conductor of the Wiener Kammerspiele. A year later he and his family fled Vienna and settled in Britain.

Red Sails in the Sunset 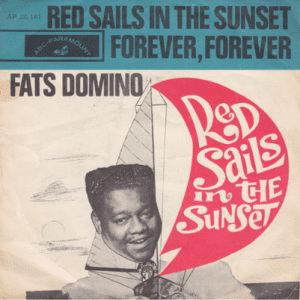 In London, Grosz struck an unlikely but productive partnership with lyricist Jimmy Kennedy. Together they produced a series of popular songs for the ‘Tin Pan Alley’ publishers whose activities were concentrated around Denmark Street, Soho. Their first triumph was Isle of Capri, a tango foxtrot published in 1934, which was turned into a smash hit by actress and singer Gracie Fields (who would later make the island her home).

Many of the Grosz & Kennedy songs became (and remain) international successes, including “Harbour Lights,” “At the Cafe Continental,” and “When Budapest was Young.” Their most lasting composition (for which Grosz used the pseudonym of Hugh Williams) was “Red Sails in the Sunset.” Kennedy, who spent his youth in Northern Ireland, had been inspired in his lyrics by the red sails of a yacht named Kitty of Coleraine which he had watched sailing past. At the time, he was staying in Portstewart, a resort on the northern coast of the Province (where the annual Red Sails Festival is celebrated to this day).

Published in 1935, the song was used that same year in the Broadway production of Provincetown Follies at the Provincetown Playhouse and almost immediately adopted by Bing Crosby, Louis Armstrong, and others. Revived in 1951 by Nat King Cole, the Beatles played “Red Sails in the Sunset” in 1962 at the Hamburger Star Club. Possibly the most memorable version was produced a year later by Fats Domino.

Grosz himself had little control over his artistic direction as his London publisher Peter Maurice Music was not interested in “serious” compositions. Maurice merely valued his client’s talent for the melodic fusing of word and tune with dance rhythms. The price of success was anonymity. Grosz’s compositions were published under various names (Will Grant, André Milos, or Hugh Williams) as the British Musicians Union had barred refugee composers and performers from earning a living. Grosz was unable to sign off his compositions under his own name.

Exile has been described by some commentators as the death of an old culture and the birth of a new one. That is a misunderstanding. There is no demise, just the pain of memory; there is no birth, just the adaptation of new cultural and linguistic conditions. Creativity becomes an act of pain and regret, an expression of loss. Grosz and many other émigré musicians shared a similar fate. Having escaped the physical and intellectual horrors of Nazi repression, in exile their presence was treated with suspicion.

There was another painful irony in the appreciation of Grosz’s creative output. His earlier compositions had been singled out for special condemnation by the Entartete Musik exhibition. Since his London songs were published under assumed names, some of those were actually played and liked in Nazi Germany.

As his reputation spread, Grosz was invited to Hollywood to discuss the possibility of composing film scores for Warner Studios. In April 1939 he and his wife Elisabeth Schoen traveled to New York, leaving their beloved daughter Eva Anneliese in the care of her grandmother and other members of the family.

After successful negotiations, Wilhelm set out writing music for The Santa Fe Trail starring cinema’s golden couple Errol Flynn and Olivia de Havilland. The outbreak of war in Europe meant that Grosz and his wife were stuck in New York. They were prevented from returning to Britain and reunite with Eva as they were considered an enemy aliens.

To sailors, the sight of the legendary “Phantom Ship” or “Flying Dutchman” was a terrible omen, a “harbinger of wreck and woe” (Walter Scott, 1812). In Richard Wagner’s Der Fliegende Holländer (1843) the ship’s blood-red sails augurs wreckage and adversity.

In the case of Wilhelm Grosz, his most admired song turned to be a red-sailed yacht of doom. In spite of an apparent beneficial transition from vulnerable refugee to professional musician, the rapid sequence of forced migration, cultural relocation, and brutal separation from his daughter proved too much to bear. Intense worry took its toll.

On December 10th, 1939, while performing in a private recital of Richard Strauss’s Der Rosenkavalier in Forest Hills, Queens, he collapsed at the piano. He died just as the soprano voice of Marschallin Marie Therese von Werdenberg sang the last line “In Gottes Namen” (In God’s name) from the opera’s final act.

It was not until after the war that Wilhelm’s relatives were able to travel to New York and mourn the premature loss of a multi-talented musician. The Santa Fe score was completed by fellow Austrian immigrant Maximilian (Max) Steiner.

Illustrations, from above: Wilhelm Grosz towards the end of his life (The Wilhelm Grosz Estate); Santa Fe Trail poster; Das boxende Känguruh; Jonny Strikes Up, 1927 by Ernst Krenek; Afrika Songs (Op. 29), 1929 by Wilhelm Grosz; concert performance poster for Baby in der Bar; and Red Sails in the Sunset, ABC/Paramount 1963 by Fats Domino.