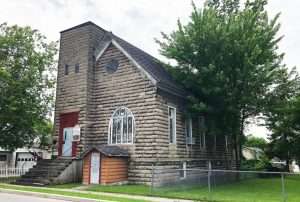 The Thomas Memorial AME Zion Church is a testament to the struggles and achievements of Watertown‘s African American community. Its original congregation was formed in 1878, consisting of many railroad workers, some of whom were formerly enslaved and many who were active abolitionists. Under the leadership of Frank Thomas, for whom the church is named, members of the congregation built the church themselves in 1909.

Descendants of Frank Thomas continue to live in the community, linking the past to the present. From its early days and connections to the Underground Railroad to its consistent use for worship service through 2012, the church long served as an anchor for the African American community of Jefferson County.

The Church has been without a caretaker since 2017, but an active coalition has formed to save it from demolition. Preservation of the building will recognize the contributions of the African American railroad workers who were vital to Watertown’s economic success in the 19th century.

Additionally, a previous caretaker would provide tours of the church to the local students to discuss the significance of the Underground Railroad and the role the church played in supporting the early years of forming the local African American community. Working with local stakeholders to find a use that will best serve its community today, this modest building has the potential to educate and inspire.

The Preservation League of New York State has included the Thomas Memorial AME Zion Church in Watertown, Jefferson County, NY on the 2022-2023 Seven to Save list.  The list highlights New York’s most endangered historic sites and the League offers listed places wider visibility, assistance with advocacy, and technical services.