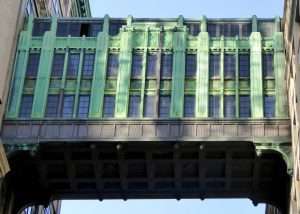 All told, over 40 historic buildings and structures stand to be lost while displacing thousands of residents and businesses.

According to Preservation League of New York State, “the immediate impact on the people who live and work in this neighborhood would be devastating. The needless demolition is an environmental catastrophe. The negative environmental impact related to the embodied carbon that is wasted when buildings are demolished and put in a landfill, combined with the carbon output of major new construction projects, is in direct opposition to New York State’s proclaimed climate action goals.”

A group of concerned community organizations led by co-coordinators Sam Turvey of RethinkNYC and Lynn Ellsworth of Human-Scale NYC, banded together in 2020 to fight the Penn Area Plan. The group has worked to push the Plan’s flaws to the forefront of public attention.

The Preservation League of New York State has included the Penn Station Neighborhood on the 2022-2023 Seven to Save list. The list highlights New York’s most endangered historic sites and the League offers listed places wider visibility, assistance with advocacy, and technical services.