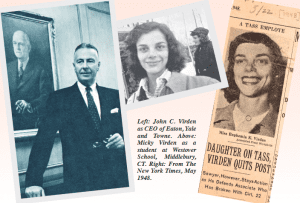 “Fellow Travelers” is set in the Washington, DC of the 1950s, as the anti-communist crusades of Richard Nixon, Joseph McCarthy and their ilk infiltrate and all but overwhelm every department, agency and office in government.

I can not help but reminded of my own family’s experience with “the Red Scare” during the administration of President Harry Truman.

In 1948, my grandfather, a Cleveland manufacturer named John C. Virden, went to Washington to lead the Office of Industry Cooperation in the Commerce Department, a position for which he was well qualified, having served as a director of the War Production Board. He then supervised the sale of US Army surplus to European governments at the war’s end.

My mother, Euphemia Virden, a recent graduate of Sarah Lawrence College, known to all as Micky, moved to Washington that same year.

She, however, went to work for TASS, the Soviet news agency. It did not take long for the media to put those incongruous – and incongruent – pieces together.

“My daughter, though a girl of high ideals, is only 22 and in my judgement is being simply exploited,” my grandfather told the Associated Press, adding, “She and I had a complete break when she decided to accept this position and I have not seen or communicated with her since that time.”

Nevertheless, a Republican congressman from Michigan, Fred L. Crawford, insisted that my grandfather be fired.

That very spring, hearings on the proposed North Atlantic Treaty – the foundation of NATO – were being held across the city in the US Capitol.

Soviet-style communism, a partner in the Popular Front against fascism just a few years earlier, was now considered an “armed doctrine” (to use a phrase of Edmund Burke’s) and an existential threat to the US. Congressman Crawford saw his opportunity and he seized it, though not as successfully as Nixon and McCarthy would when presented with similar opportunities a few years later:

“[This case] may well open up a new field for consideration as to whether there are others in high government service who similarly have members of their families on the payroll of the Moscow way in which you have discharged important duties under trying circumstances. It is regrettable that the services of a faithful and efficient public servant should be sacrificed to political expediency. I believe in you. My faith in your loyalty is unchanged.”

Secretary Sawyer also defended him, going so far as to ask him to withdraw his letter of resignation. Newspaper columnists wondered why a girl from a background they presumed to be privileged would be attracted to communism.

My mother once told me that precisely because she was sheltered, her first encounters with poverty shocked and disturbed her, so much that only the most immediate and radical solutions appealed to her.

Moreover, my mother’s favorite teacher at Sarah Lawrence was Genevieve Taggard, a left-wing poet and a biographer of Emily Dickinson, who happened to be married to Kenneth Durant – the last American journalist to head TASS. He is better known today, at least here in the Adirondacks, as a historian of the Adirondack guideboat.

I do not know if my mother went to work for TASS upon the recommendation of Durant or over his objections. 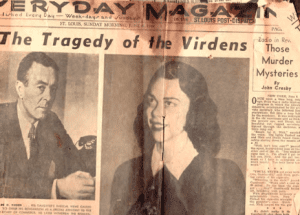 In any event, they remained close, Kenneth becoming something of a paternal figure in her life, a substitute, perhaps, for her own father, from whom she remained estranged for many years.

The Washington offices of TASS occupied space in the same building that housed the Daily Worker, where my father was an editor. They married in 1950.

Although, or rather because my father was a prominent Communist journalist, he had little or no contact with those in and outside government who were busy sniffing out subversion – his political affiliations were obvious, there for all to see.

He did, however, play an indirect role in one of Joe McCarthy’s Senate hearings, when a young Robert F. Kennedy was Roy Cohn’s co-counsel.

In 1954, a Pentagon clerk named Annie Lee Moss who had been accused of being a Communist was ordered to testify before McCarthy’s Permanent Subcommittee on Investigation, which had gathered evidence that she knew Rob Hall.

When Roy Cohn asked her if that was the case, Ms. Moss, an African-American, replied that she did indeed know Rob Hall. Before Cohn could pounce, Robert Kennedy whispered in Cohn’s ear that there were two Rob Halls, the Communist journalist and a black union organizer of the same name who lived in Ms. Moss’ neighborhood. The session adjourned in disarray.

Years later, when Kennedy was the US Senator from New York and attending the 1967 Whitewater Derby in North Creek, my father was introduced to him as Rob Hall, editor of The Warrensburg-Lake George News. My father said he thought he caught the briefest flicker of recognition in Kennedy’s eyes.

Photos, from above: Left: John C. Virden as CEO of Eaton, Yale and Towne, above: Micky Virden as a student at Westover School, Middlebury, CT, right: From The New York Times, May 1948; and photo of the St. Louis Post-Dispatch, May 1948.