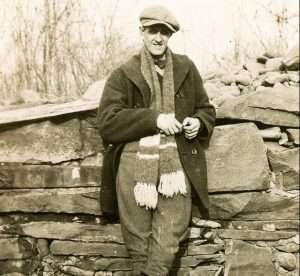 A young Clarence Bolton arrived in Ulster County, NY in 1917 for a brief visit and stayed for the next 45 years. Once he arrived in Woodstock, he began to study painting with John Carlson. Later moved on to explore printmaking and became an accomplished lithographer, exhibiting his work all over the country.

Bolton’s love of Overlook Mountain and the surrounding fields and streams became the inspiration for his work. Along the way, Bolt became an integral part of the Woodstock community. Among his many interesting ventures he ran a commercial printing business, established The Nook (which later became the Café Espresso), and wrote and published The Clatter. He met and married Louise Cashdollar and was welcomed into her large, extended family.

The Historical Society of Woodstock’s (HSW) summer exhibit, “Bolt – The Art and Times of Clarence W. Bolton,” will open on Saturday July 2nd.

The exhibit will run through August 28th and will be open to the public on Saturdays and Sundays from 1 to 5 pm. HSW will host an opening reception on Saturday July 2nd beginning at 3 pm.

Art historian Bruce Weber will give a talk on the exhibit of Clarence Bolton’s work on view at the Historical Society of Woodstock through August 28th. Dr. Weber has served as a curator at various institutions, including the Norton Museum of Art, the National Academy Museum, and the Museum of the City of New York, and has published widely in the field of American art. He has been focusing on the historic Woodstock art colony for the last several years as a writer, lecturer, and curator. Last autumn he curated the exhibition of Tomas Penning’s sculpture at the Woodstock School of Art. Dr. Weber also authored an essay on Bolton’s life and career that is available for purchase in the shop of the Historical Society.

The Historical Society of Woodstock is located at 20 Comeau Drive in Woodstock. Admission is free. For more information, call (845) 679-2256 or email info@historicalsocietyofwoodstock.org.