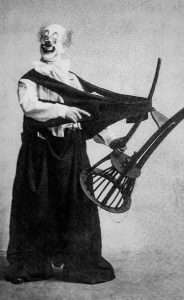 The neighborhood folks representing the theatre were Edward “Eddie” Fritz Smith, his wife Kitty Sharpe, and their children, Catherine, Sidney, Eddie, Jeal, and William. This couple was no stranger to the life in the spotlight, for even as they settled into a quiet life in Saratoga Springs they were still known across the globe as international celebrities.

In 1875, a year after their marriage, the couple was living with Kitty’s parents, George and Catherine Sharpe in Saratoga Springs. Eddie, then listed as an acrobat, is called Edwin Smith. Kitty’s father was born George Adam Schaab, taking the name Sharpe after he had emigrated from Germany to the city of New York as a youth.

Eddie Smith was born in Liverpool, England in 1849, a member of the renowned Chantrell family of acrobats and tumblers. By the time he came to America in 1873, he was an accomplished performer, having just finished touring France, Spain, India, and South America with his partner and fellow acrobat James Cassim.

Once they arrived in New York, the act was quickly hired by Cooper and Bailey Circus. Eddie’s wife-to-be, Kitty, had also recently been hired by the circus to perform as a song and dance duo with her sister Dolly. After meeting Eddie, who by then was going by the stage name of “Eddie Fritz,” she was so taken with this accomplished actor that she quickly broke her marriage engagement with another performer, circus equestrian Frank Pastor. Eddie and Kitty married in August of 1874, and together they continued to perform in the circus for the next five years.

Kitty Sharpe had been introduced to the stage by her mother, who went by the stage name of Rose St. Audley. For her first role, the eleven-year-old Kitty was cast as one of thirty-five angels in a Black Crook Theatre Company production in New York. After training with her mother for three years, together they traveled throughout the United States.

During this time Kitty partnered with sharpshooter Frank Frayne in an act where Kitty would have apples shot from the top of her head, as well as a pipe from her lips. It was while on tour in St. Louis that Kitty learned to “sand dance,” a sliding style jig performed in thin-soled shoes on a sand-covered floor. Her teachers were the Hawley Brothers, a song and dance team that was also performing in St. Louis at the time. By the age of nineteen, Kitty was advertised as the “Greatest Sand Dancer on the American Stage.”

Following a pattern of circus life in the summer and variety shows up and down the Atlantic seaboard in the off-season, Cassim, Fritz, and Kitty worked together until the need to settle down brought the couple to Saratoga where Kitty’s father owned a meat market.

Throughout the 1880 and 90’s Kitty continued to work the summer circus season and off-season variety halls. During her tour of Canada in 1894, she was promoted in Toronto as “the greatest sand-dancer on the American stage.” There was even a jig “Kitty Sharpe’s Champion Jig,” an African American-inspired dance tune published in 1882.

Somehow throughout these years, Kitty and Eddie found time to raise a family. Their first, Catherine, was born in Boston in 1875, followed by Sidney who was born on board a ship returning from a circus tour of Australia; Eddie born in Brooklyn and Jeal and William in Saratoga Springs.

Of all their children, only one, Eddie Fritz Smith, followed their parents into show business. Under their guidance, he first stepped onto the stage in 1886 at the age of seven. Three years later his father quit working for the circus and with his partner, the English clown Leslie, brought young Eddie into their act. Their performance in those years featured a trick house where the clowns chased each other popping in and out of trap doors and windows. After this initial start, Eddie went on his own to England where he honed his skills as both a clown and pantomimist.

It was in England that he teamed up with Fred Cornalla, taking on the name “Cornalla and Eddie.” A favorite across Europe, they even had six engagements “By Royal Command” to perform before the King and Queen of England. For years, the duo took their act to audiences in France, Germany, Austria, and Italy, the act finally breaking up just before the beginning of the Second World War.

Caught in Belgium at the start of the war, Eddie made his way to England, where he brought his solo act to the stage. During his time in England, he also served the local community as a fireman. After the war, he returned to America and settled in Saratoga, a place he had grown to love during the time he spent there in his youth.

During the years that Eddie Smith had spent in Europe, his parents had left show business and started a new phase of their lives in Saratoga. After retiring in 1904. his father opened a gym in Saratoga Springs, and by 1910 was given the position of watchman at the Saratoga Springs waterworks, a job he held until his death in 1931.

After his passing, Kitty continued to live in Saratoga, staying close to her remaining family. She passed away in 1945, at the age of eighty-nine, and was buried next to her husband in Saratoga’s Greenridge Cemetery. Their son, Eddie Fritz Smith, passed away in March of 1972 and was also laid to rest in Greenridge.

Photo of Eddie Fritz Smith is from A Saratoga Original: Clarence Knapp and Those He Met Along the Way, published in 2007 by Minnie Clark Bolster.