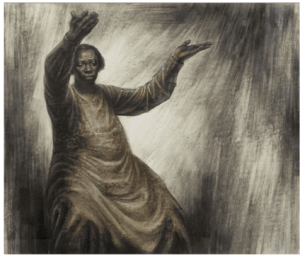 The National Abolition Hall of Fame and Museum has announced the new film Songs of Slavery and Emancipation will debut at 5255 Pleasant Valley Road in Peterboro, Madison County, NY and at 320 West 37th Street in Manhattan on Saturday, June 18th.

The film will begin at 7 pm with the sight and sound of Max Smith, Co-Chair of the Gerrit Smith Estate National Historic Landmark’s Annual Peterboro Emancipation Day and a member of the Cabinet of Freedom for the National Abolition Hall of Fame and Museum in Peterboro NY. Film producer Mat Callahan filmed in Peterboro and at Berea College in Kentucky.

Mat Callahan presents, in the Song of Slavery and Emancipation film, book, and CD, recently discovered songs composed by enslaved people explicitly calling for resistance to slavery. Some songs originated as early as 1784 and others as late as the Civil War.

He also presents long-lost songs of the abolition movement, some written by fugitive slaves and free Black people, challenging common misconceptions of abolitionism. Songs of Slavery and Emancipation features the lyrics of fifteen slave songs and fifteen abolitionist songs, placing them in historical context and making them available again to the general public. These songs not only express outrage at slavery but call for the destruction of the slave system.

In observance of Juneteenth weekend, the National Abolition Hall of Fame and Museum will be open Saturday, June 18th from noon to 6:30 pm. Power of the Pen campaigns from the Madison County Anti-Racism Collaborative will be at the museum as well as a self-assessment on racism. At 6:30 pm, Juneteenth: A Walk Through Galveston TX will provide information on the origin of Juneteenth Day.