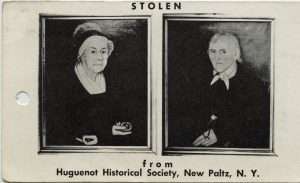 The two portraits, depicting prominent New Paltz residents Dirck D. Wynkoop (1738-1827) and his wife Annatje Eltinge (1748-1827), were missing for fifty years, after they were stolen on February 16th, 1972 while on display at the 1799 Ezekiel Elting (aka LeFevre) House on Huguenot Street. 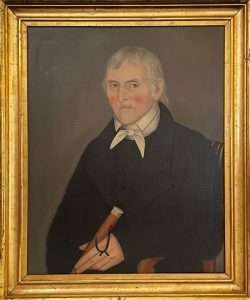 Few in the New Paltz community remembered the theft since it had happened decades ago, but in 1972 the burglary was widely publicized. Dozens of items were stolen, including silver, ceramic pieces, swords, and guns. Many items were recovered a few months later, but the location of the paintings remained a mystery.

Then, in 2020, Carol Johnson, HHS Trustree and Coordinator of the Haviland-Heidgerd Historical Collection at Elting Memorial Library, raised the theft to Josephine Bloodgood, HHS Director of Curatorial and Preservation Affairs, and the two began comparing information from the records.

In their research, Johnson and Bloodgood discovered the two paintings illustrated in a recent online catalogue of the artist Ammi Phillips’s work. In the catalogue, the subjects portrayed were listed as “unidentified,” but the likenesses and other details in the paintings matched those seen in photographs of the Wynkoop portraits stolen from HHS. The online catalogue also revealed that the two paintings had been sold in an auction at Sotheby’s in New York in 2005.

After discussion with members of the HHS Board of Trustees, Bloodgood reached out to the FBI New York Art Crime Team. She shared with them all the information that Johnson, she, and other HHS staff had compiled. Over the course of a year and a half, the FBI worked with U.S. Attorneys to secure the necessary court orders to track down where the paintings were located.

As it turned out, they were several states away from New York, in the home of a collector who had purchased the paintings at auction, unaware of the theft and the paintings’ true ownership. The collector contacted Mary Etta Schneider, Chair of the HHS Board of Trustees, to express support for returning the paintings.

The FBI delivered them to HHS on February 17th, 2022, exactly fifty years and one day from the day they were originally stolen in 1972. HHS is offering a special program on Sunday, June 26th, 2 pm, at which Johnson and Bloodgood will full share the story of the theft and recovery of the paintings. 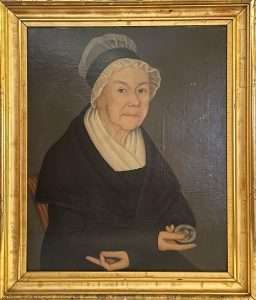 The paintings of Dirck D. Wynkoop and his wife were created in the 1820s by Ammi Phillips, the well-known American folk portraitist whose career spanned 50 years. Born in the rural Connecticut town of Colebrook in 1788, Phillips is widely considered to be self-taught, although he may have studied while young with established artists working in that region.

During his long career, Phillips produced hundreds of sensitive likenesses of men, women, and children throughout New York’s Hudson Valley, Massachusetts, and Connecticut. Phillips is considered an “itinerant painter,” one who traveled from place to place to complete his portrait commissions.

The paintings of the Wynkoops are probably among the earliest works completed by Phillips in the area of New Paltz. Other portrait subjects completed in Ulster County include members of the DeWitt, Hardenbergh, Hasbrouck, Swartwout, and Van Keuren families, among others.

Dirck D. Wynkoop was born in Hurley, New York, in 1738, a descendant of Cornelius Wynkoop, one of the first Dutch settlers there. Dirck married Sarah Eltinge and eventually took over her father Noah Eltinge’s farm on “the Plains” south of New Paltz. Wynkoop ran a successful wheat plantation and, like other wealthy land owners in the Hudson Valley, exploited the labor of enslaved African Americans to work in his fields and in his household. After Sarah died, Dirck married her first cousin, Annatje Eltinge, the subject of the other portrait. At the time their likenesses were captured, Dirck was in his early eighties and Annatje in her early seventies.

The paintings sustained some damage in the fifty years they were missing, including scratches, surface abrasions, and distortion of the support on which the canvas of the Annatje portrait is mounted. HHS is raising funds to have the paintings professionally cleaned and condition issues addressed.

A special event featuring the two paintings by 19th-century American portrait artist, Ammi Phillips, that were stolen and missing from HHS for fifty years, will be held on Sunday, June 26th. This event, entitled “A Tale of Two Paintings,” will feature presentations by Carol Johnson, HHS Trustee and Coordinator of the Haviland-Heidgerd Historical Collection at Elting Memorial Library, and Josephine Bloodgood, HHS Director of Curatorial and Preservation Affairs, along with guests, who will relay the story of the paintings’ shocking theft and amazing recovery. Light refreshments will be served. The program is $15 general admission; $12 discounted admission for HHS members, seniors, students, and children under 13; with free admission for veterans, active military members and their families, and children under 6. To register, click here.

For more information about Historic Huguenot Street, visit their website.

Photos, from above: black and white postcard distributed by HHS in 1972 offering a reward for the return of the paintings; and portraits by Ammi Phillips (1788-1865) of Dirck D. Wynkoop and Annatje Eltinge, ca. 1821. Oil on canvas, courtesy Historic Huguenot Street Permanent Collection.