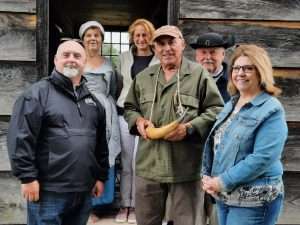 Skillfully created by horn craftsman Hank Yost, the piece presented reflects the architecture and engraving styles of the Revolutionary period and was specifically designed to represent the life and times of the Hartmansdorf House’s original occupant Philip Bartholomew.

Engraved powder horns, once a convenient and practical way of storing and carrying gunpowder, are now considered an important and significant form of American folk art. Created using cow horns, Yost stated they became the medium on which a colonist or soldier might express himself, document his travels and campaigns, or while away the hours spent on garrison duty.

According to Yost, the mid-18th century was likely the “Golden Age” of American horns, with the French and Indian War (1755-1764) and the American Revolution (1775-1783) engaging large numbers of combatants in lengthy campaigns that included long periods of inactivity during sieges and garrison duty.

Yost used Bartholomew’s pension record, which indicated he served several enlistments in the local militia, including one in 1779, as the inspiration for his design. He chose lettering which adopted a combination of styles from the late 1740s and the periods surrounding the French and Indian War.

The piece includes the commonplace identification of the owner’s name, “his horn,” and the date of the manufacture. The “back” of the horn includes a representation of the three forts which ran along the Schoharie Valley, labeled “Upper,” “Middle,” and “Lower,” in the direction of the creek’s flow north to the Mohawk River. The decorative band around the horn’s base is a combination of motifs taken from the original horns of that time and the two engraved Indigenous figures are a nod to what must have been a constant thought in the minds of the valley’s inhabitants.