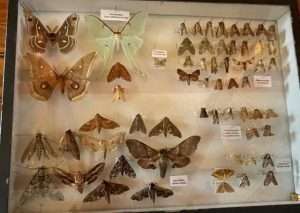 That was just one of the many largely unknown facts shared by Paul Smith College’s Professor of Biology Janet Mihuc at a recent meeting of the Adirondack Garden Club held at the Ausable Club in St. Huberts in the High Peaks.

Moths, like butterflies, progress through four stages in their life cycle: egg, caterpillar, pupa and adult. Gardeners are probably most aware of the caterpillar stage, because of the damage they frequently cause to plants with their voracious appetites as they gorge and store up food. Dr. Mihuc pointed out the integral role caterpillars play in transferring the sun’s energy flow: the sun to plants that then feed the caterpillars who are in turn eaten by woodland birds and animals.

In addition, herbivores like caterpillars drive plants to evolve by developing protective chemicals that we humans use, such as tannins, spices, and, blessedly, caffeine. On balance, she pointed out, moths are a benefit, including the heavily-feeding albeit destructive caterpillar stage.

Even given the unsightly damage spongy moths do in this area as they decimate oak and other trees, those trees fully refoliate, and the waste from the caterpillars, provides valuable nutrients to the soil (although it was duly noted that being in the woods when that kind of a shower is falling is less than pleasant).

Dr. Mihuc also pointed out that the main reason that spongy moth caterpillars don’t provide a bountiful feast for birds and other predators in this area is that they are an invasive nonnative species. They were introduced over 150 years ago near Boston with the hope of breeding a silk-spinning caterpillar that was more resistant to disease than the domesticated silkworm.

As an add-on to her lecture, Dr. Mihuc shared some of her collection of moth specimens with the group and noted that she has to date collected 497 distinct moth species on the Paul Smith’s College campus — and aims to hit 500 this year.

More information about the Adirondack Garden Club is available on the club’s website.