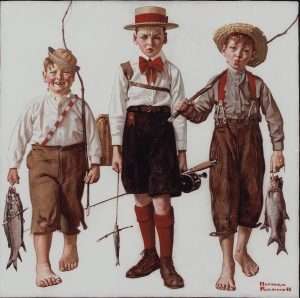 Over the course of his six-decade career, Norman Rockwell illustrated the everyday moments in America, featuring diverse races, nationalities, economic backgrounds, and creeds.

Through two world wars, the Great Depression, the wars in Korea and Vietnam, and the Civil Rights struggles, Rockwell promoted an optimistic world in the face of hardship and struggle.

The Munson-Williams-Proctor Arts Institute have announced the exhibition “Norman Rockwell,” featuring iconic images of American scenes painted by the most beloved artist and illustrator of the 20th century, on display from June 11th through September 18th.  This exhibition will present Rockwell’s story-filled scenes of American life as well as the people behind the images — from presidents to postmen.

With more than 50 original artworks including full-scale oil paintings, photographs, drawings, and archival magazines and tear-sheets, will look at how the artist’s most significant commissions developed from start to finish. Rockwell’s particular style of artistic journalism will resonate throughout the exhibition, giving visitors an exclusive perspective on historical events that shaped American life during much of the 20th century. Included in the exhibition will be all 323 Saturday Evening Post covers that Norman Rockwell (1894–1978) illustrated over 47 years, from 1916 to 1963.

Rockwell’s paintings were reproduced continually on magazine covers from the 1920s to the 1960s, and their appeal was immense. Time magazine called Rockwell “probably the best-loved U.S. artist alive,” while the New York Times compared his paintings to Mark Twain’s novels. His later paintings from the 1960s and ’70s promoted civil rights and equality for all, and even his seemingly whimsical compositions often addressed shifting gender roles, class divides, democratic values, and the embrace of all ethnicities and religions.

With themes relevant to today, “Norman Rockwell” will enable visitors to rediscover historical events of the 20th century — from a nostalgic 1918 illustration of boys fishing, through World War II and the legendary “Four Freedoms” series to “New Kids in the Neighborhood,” a powerful Rockwell artwork addressing Civil Rights and desegregation. Also included will be memorable portrayals of the 20th century’s most noted and notorious political figures, including Robert Kennedy, Lyndon Johnson, and Richard Nixon alongside images of refugees and coal miners.