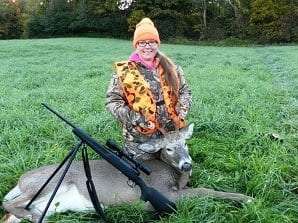 The New York State Department of Environmental Conservation (DEC) has announced hunters in New York killed an estimated 211,269 deer during the 2021-22 hunting seasons.

The season’s take was down 17 percent last year and data points to a few factors for a cause, including the resurgence of Epizootic Hemorrhagic Disease in certain regions of the State and fewer Deer Management Permits allocated. There was however a 36-percent jump in youth deer kills and a late-season deer harvest increase, particularly among young hunters.

The 2021 estimated deer take included 110,839 antlered bucks and 100,430 antlerless deer. Statewide, this represents a five percent decrease in antlered buck killed and a 25-percent decrease in antlerless deer killed from the last season. In part, the decline in antlerless deer killed was due to reduced allocation of Deer Management Permits and a natural correction from 2020 when antlerless harvests increased substantially (30 percent) from 2019. In addition, hunting success appears to have declined in portions of the Hudson Valley, Long Island, and near the eastern shore of Lake Ontario most heavily impacted by Epizootic Hemorrhagic Disease (EHD) in 2021.

Also in 2021, State lawmakers established a pilot program allowing young hunters, aged 12-13, to hunt deer with a firearm in counties that passed a local law to participate. Fifty-two counties opted in, resulting in a 47-percent increase (17,346) in young hunters licensed to hunt during the special Youth Deer Hunt and a 36 percent jump in the number of deer killed. A report of deer hunting by 12- and 13-year-old hunters is available on DEC’s website.

Additionally, anecdotal reports from many Southern Zone hunters who participated in the inaugural Holiday Deer Hunt were that participants enjoyed this new opportunity and found success in filling their tags for the season. The Holiday Hunt was a second portion of the late bow and muzzleloader season from December 26th to January 1st designed to give hunters opportunity when students are on school break and families are gathered for the holidays.

Late-season hunting success increased approximately 10 percent with the additional days, and young hunters reported killing more deer during the Holiday Deer Hunt than during the traditional portion of the late bow and muzzleloader season. DEC is planning additional outreach to landowners who own snowmobile trails in areas open to the Holiday Hunt to understand their perspectives and decisions related to recreational use of their lands during this period. DEC will also continue to work with stakeholder groups to educate hunters, landowners, and other winter recreationists about compatibility of their activities by encouraging everyone to “Share the Snow.”

As always, DEC continues to promote hunter safety when afield. The 2021 hunting seasons in New York were the safest ever, with the lowest number of hunting-related shooting incidents since record-keeping began.

Across the state, hunters continued to voluntarily pass up young bucks, and approximately 60 percent of the antlered bucks killed were 2.5 years old or older. The goal of DEC’s Let Young Bucks Go and Watch Them Grow campaign is to preserve hunter freedom of choice while advancing the age structure of bucks, predominantly into the 2.5-year-old age class, and DEC is seeing that happen.

Deer hunting data are gathered from two main sources: reports required of all successful hunters and DEC’s examination of killed deer at meat processors and check stations across the State. Estimates are made by cross-referencing these two data sources and calculating the total kill from the reporting rate for each zone and tag type. DEC’s 2021 Deer Harvest Summary report provides tables, charts, and maps detailing the deer take around the state and can be found here. Past summaries are also available on DEC’s website.

Stay Vigilant to Keep CWD Out of New York

As noted, DEC tested 2,713 dead deer killed by hunters across New York and found no evidence of CWD in the herd. DEC partners with cooperating meat processors and taxidermists to obtain samples for testing each year.

CWD is a highly contagious disease that affects deer, elk, moose, and caribou. CWD poses a significant threat to New York’s wild white-tailed deer herd. It is always fatal to deer and no vaccines or treatments are available. CWD is believed to be caused by a prion, which is an infectious protein, that can infect animals through animal-to-animal contact or contaminated environments. It has been found in 29 states.

To expand protections for New York deer and moose, DEC adopted regulations in 2019 to prohibit importation of carcasses of deer, elk, moose, and caribou taken anywhere outside of New York. Environmental Conservation Police Officers (ECOs) increased enforcement efforts, seizing and destroying hunter-killed deer brought in illegally. DEC also strongly recommends that hunters not use natural deer urine-based lures, which could contain CWD prions. Hunters who believe lures are important for their success can use synthetic products instead.

For wildlife diseases like CWD, prevention is the most effective management policy, and hunters are important partners in disease prevention. If CWD is detected in New York, DEC and the State Department of Agriculture and Markets will implement the Interagency CWD Response Plan. The plan will guide actions if the disease is detected in either captive cervids — any species of the deer family — or wild white-tailed deer or moose. There are no documented cases of CWD infecting humans, but DEC urges caution when handling or processing CWD-susceptible animals. For more of what DEC is doing and what you should know about CWD, visit DEC’s website.