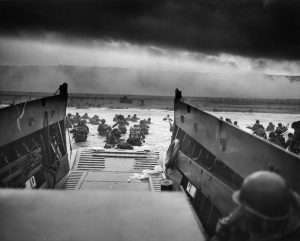 On D-Day — June 6th, 1944 — over 156,000 Allied forces landed on five beaches along a 50-mile stretch of the heavily fortified coast of France’s Normandy region. Codenamed “Operation Neptune” it was the largest seaborne invasion in history.

The operation began the liberation of France (and later western Europe) and laid the foundations of the Allied victory on the Western Front of the Second World War.

The Matthewis Persen House in Kingston will host Hank Yost, World War II reenactor, for a free presentation about the D-Day Invasion, set for Saturday, June 4th.Yost will discuss various aspects of the troops, tactics and weapons as well as what was happening on the home front and the changes in US society.

This program will take place from 10 am to 4 pm. The Matthewis Persen House is located at 74 John Street in uptown Kingston in Ulster County, NY.

Photo: Men of the 16th Infantry Regiment, US 1st Infantry Division wading ashore on Omaha Beach on the morning of 6 June 1944.