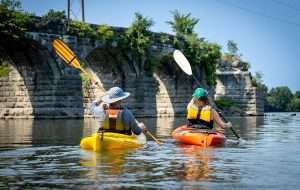 In celebration of Great Outdoors Month, The New York State Canal System, including the Erie, Champlain, Oswego, and Cayuga-Seneca canals, is getting special recognition from the U.S. Department of the Interior as one of the nation’s newly designated National Water Trails.

New York State Canalway Water Trail is comprised of over 450 miles of land cut canals, and interconnected lakes and rivers with more than 150 public access points for paddlers. The water trail follows the New York State Canal System across the full expanse of upstate New York, offering visitors a wealth of places to visit and sights to see.

The newly designated trails join a network of more than 1,300 existing national recreation trails, which can be found in every U.S. state, the District of Columbia and Puerto Rico.

Photo of paddlers explore the Erie Canal at the site of the historic Richmond Aqueduct in Montezuma provided.